On to the real question 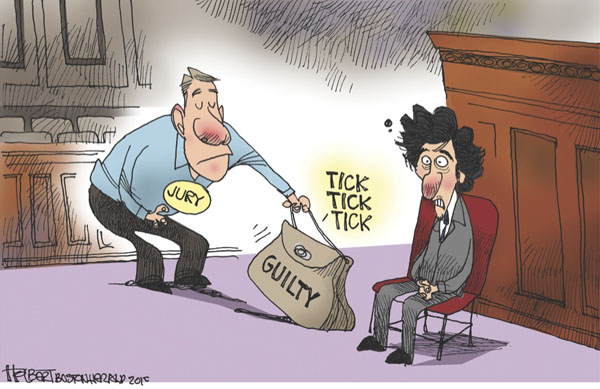 Should Dzhokhar Tsarnaev be put to death for the Boston Marathon bombing? That’s the real question hanging over a Boston courtroom for the past several weeks.

His attorneys never denied Tsarnaev’s guilt; the defense put up only four witnesses to the prosecution’s 92. But they laid the foundation for a life sentence. They contended that the defendant, only 19 at the time of the 2013 bombing, had been dominated by his older brother and would not have acted alone.

But the younger Tsarnaev was alone when he was hiding in a boat and scrawling jihadist messages, assistant U.S. Attorney Aloke Chakravarty said. “These were deliberate choices, these were political choices. An eye for eye, you kill us, we kill you, that’s what he said and that’s what he did.”

A federal jury returned guilty verdicts on all 30 counts against Tsarnaev on Wednesday. The same jury will consider whether he should die for his crimes — killing four people and maiming or injuring more than 240 others — or spend the rest of his life in prison.

A heinous crime deserves a heavy sentence. But which would be worse for a 21-year-old terrorist: to be put to death, or to have the country he hates show him mercy? An eye for an eye or a lifetime to carry the burden of his crimes?

Jobs for Life: A ministry that works