Medical marijuana: To the McDaniels, it seems ‘like a last resort’ 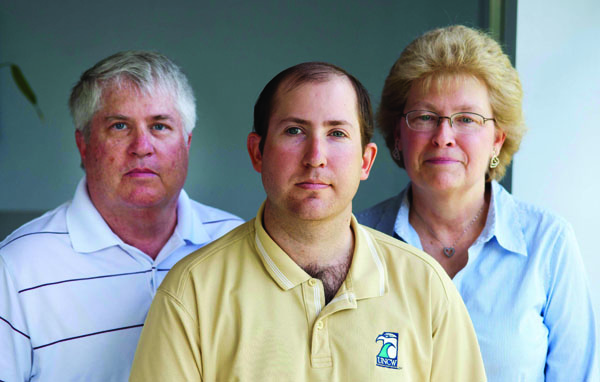 SALISBURY — Madison McDaniel’s seizures aren’t pretty. When an episode happens — and he never knows when — Madison lets out a loud scream, kicks one of his legs violently and falls.

Several minutes later when the seizure has passed, the 29-year-old has no memory of the event. His parents, Mark and Pamela McDaniel, are experts in dealing with the seizures, which have happened with regularity since the family was involved in an automobile accident in 2009.

Pamela McDaniel, who has kept charts of these “post-concussive” episodes, said Madison now averages about 60 seizures per month.

She is a teacher of math and computer science by trade, so the charts come easily. Mark McDaniel retired as a lieutenant colonel after 22 years in the Air Force before fashioning an additional 13-year career with the VA Medical Center in Durham, where he served as the nurse manager in the operating room.

The McDaniels, both of whom grew up in Rowan County and whose parents still live in this area, will tell you they are conservative, law-abiding, church-going folks.

So they find it sort of strange these days, trying to make a case for the legalization of medical marijuana in North Carolina. Even though they have never tried cannabis as an answer to Madison’s seizures, they feel as though they’ve exhausted most every other approach.

“I feel like Alice through the looking glass,” Pamela McDaniel said, but she stressed the kind of marijuana her family would like to see legalized would be  medical treatment, not a recreational drug.

“The oil from that plant is what we’re looking for,” Pamela said Wednesday. “We’re not wanting to smoke joints.”

Pamela McDaniel spoke at a March 25 hearing of the N.C. House Judiciary I Committee in Raleigh, urging passage of House Bill 78, otherwise known as the “Medical Cannabis Act.” She told the legislators Madison has “no other good options left.”

“He just wants a chance at a decent life, to be able to go to the bathroom and take a shower by himself, to be capable of holding down a job,” Pamela said at the committee hearing, where she was given two minutes to speak.

The legislators also heard from cancer patients, young and old people in chronic pain and veterans and the wives of disabled veterans dealing with post-traumatic stress disorder and other neurological issues.

In the end, however, the committee members voted to kill the bill for this legislative session.

“It was so fast,” Pamela McDaniel recalled. “I said, ‘What just happened?'”

Before and after the committee hearing, Madison McDaniel experienced loud, discomforting seizures at the Legislative Building. On Wednesday morning, before being interviewed by the Post, he already had experienced another.

Medical marijuana is presently legal in 23 states and the District of Columbia, but the legalization of marijuana for recreational use has received much of the media attention over the past year.

Along with the District of Columbia, the states of Washington, Oregon, Colorado and Alaska have passed measures making the recreational use legal.

“A lot of people don’t understand there’s any difference between medical marijuana and smoking a joint,” Pamela McDaniel said.

From their own research, the McDaniels are most interested in Charlotte’s Web CBD, manufactured by Stanley Brothers Social Enterprises. Charlotte’s Web is a strain of medical marijuana made into an oil or extract that is high in cannabidiol, or CBD.

Pamela McDaniel said CBD-rich strains do not make people feel stoned, for the lack of a better description. THC is the psychoactive ingredient in marijuana associated with being “high.” CBD is non-psychoactive and can actually counter the effects of THC.

Madison McDaniel could take the CBD oil orally, if it were ever legalized.

“It’s not smoking, it’s not getting high, but it is about getting their lives back,” Pamela said of potential users.

But the McDaniels are quick to mention, too, that maybe the medical marijuana would not work. It’s just that they’ve tried everything else.

“It seems almost to us like a last resort,” Pamela McDaniel said.

Madison McDaniel has seen neurologists at the University of North Carolina and Duke medical centers. His parents have a list of 15 anti-epileptic prescription drugs they have tried without success.

At one point, he developed a life-threatening rash to one of the drugs, Lamictal. Madison has to be careful with the dosages of any drugs because he has only one kidney to act as a filter.

His doctors have advised against epilepsy surgery for several reasons. Madison and Pamela also are against trying a vagal nerve stimulator because they don’t think it would guarantee improvement in his quality of life.

Mark McDaniel has been a bit more bullish on that option and still wants it to be on the table.

Madison also has tried all kinds of dietary restrictions and supplements. He has gone to an acupuncturist at UNC and is seeing a naturopathic physician. But the seizures continue.

Pamela McDaniel said her son once had 29 seizures in a single day in July 2012 and 115 total for the month.

Madison McDaniel said his parents usually know which direction he will be falling when a seizure comes.

“I pretty much fall down to the back left,” he said.

“It’s like a tree falling in the forest,” Mark McDaniel added.

Madison McDaniel has been battling major health issues since he was diagnosed with a rare type of cancer when he was 11. He received the national Little League Good Sport of the Year Award in 1998 when he was 13 for all he had gone through, while still trying to play baseball.

The organization flew him to the Little League World Series  in Williamsport, Pa., from Boston, where he was being treated for a brain tumor in August 1998, and it paid for his flight back so he could resume full brain radiation.

Madison went through three brain surgeries, not counting other operations in which he lost a kidney, adrenal gland, appendix and a piece of his diaphragm. He has only partial vision in both eyes and numbness and weakness on the right side of his body.

Despite all the physical challenges, Madison graduated from high school on time, and received a bachelor’s degree in physical education from the University of North Carolina at Wilmington.

For about six years, “simple-partial” seizures he had experienced earlier disappeared. He was able to hold down jobs and hoped to have a career some day in adaptive physical education for children

But the vehicle accident the family experienced traveling home from church in Durham in September 2009 changed things for Madison. A driver turned her car left in front of the McDaniels’ minivan.

The crash totaled their van, and the other driver’s car turned over, but she was not seriously hurt. Riding in a back seat, Madison’s head was tossed around, and by the next day, he was having episodes of memory loss.

Something had been triggered in the previously injured part of his brain.

Madison soon began experiencing complex partial seizures and Grand Mal seizures. Today, his speech can be halting, and his short-term memory fades here and there.

“We do talk for him sometimes,” Pamela McDaniel said.

He is not able to drive. And occasionally he has what his mother described as “whole fuzzy days.”

But Madison stays active. With his father often close by, he works out on a Bowflex machine, plays video games, does sit-ups and rides a stationary bicycle.

He walks in their Durham neighborhood with his parents often positioned at the likeliest places he might fall. He has developed a strong left side, strong enough to go golfing with his father, and you would not want to challenge him in arm wrestling.

But there have been many sacrifices. Because the seizures can be scary and disruptive, the McDaniels have begun holding their own Sunday church service at home.

Mark McDaniel said the family could travel to another state and even relocate to one where medical marijuana is legal. But they could not bring the medical cannabis back to North Carolina legally, and North Carolina is where they want to stay.

“We don’t do illegal stuff,” Pamela McDaniel added. “Some people do it because they can’t find relief any other way.”

But for now, they can only be advocates for medical marijuana and try to inform people about its possible benefits.

“This is something that can help people,” Mark McDaniel said, “and right now, it can’t help people.”