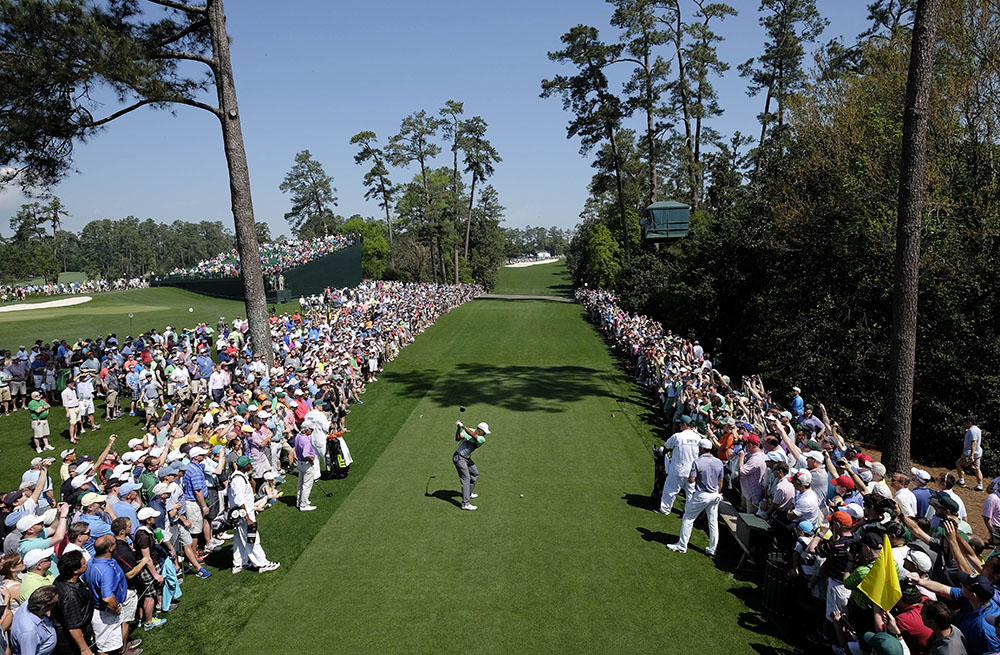 The Associated Press Tiger Woods tees off on the 18th hole during a practice round Wednesday for the Masters at Augusta National Golf Club.

AUGUSTA, Ga. (AP) — Already, it’s a Masters unlike any other for Tiger Woods.

On Wednesday his playing partners ranged in age from 6 to 63. On the practice range the day before, he listened to hip-hop music on headphones to find his rhythm.

And in what may have been the biggest surprise of the week so far, he actually smiled and tried to be engaging at his press conference, something he normally tolerates with a guarded terseness.

Woods is playing in the Masters for the 20th time, almost unthinkable for those who remember his breakout win in 1997. Even more unthinkable after all these years is no one has an idea what to expect when he tees off Thursday afternoon in an almost desperate quest to find his game and win a fifth green jacket.

Not the fans, who still cheer his every move. Not his fellow players, who have watched the roller coaster of the past five years close up.

Not even Woods himself.

“Whether I have blinders on or not, I don’t feel any different,” Woods insisted, “I feel like I’m preparing to try and win the Masters.”

The people who take money on those kind of things don’t anticipate that will happen, making Woods a 25-1 pick to win his first Masters title in a decade. The odds would be even higher — they started at 50-1 — but for a lot of people plunking $20 bills down on Woods in Las Vegas sports books because they remember what he used to be able to do on a golf course.

If some of those memories are fading, Woods has to accept some of the blame. He has been MIA so long that it’s hard to remember he was once supposed to win more green jackets than Arnold Palmer and Jack Nicklaus combined.

A new generation of players is no longer intimidated by the sight of Woods in red on Sunday, something Woods acknowledged when he talked about how he used to drive the ball past everyone other than John Daly but is happy these days just to be in the same area code. He’s 39 now, ancient in the game of golf anywhere but at a Masters that still includes Ben Crenshaw in the field.

“I won the Masters when Jordan (Spieth) was still in diapers,” Woods said, though a quick check of the calendar showed Spieth was approaching his fourth birthday by then.

The young players who hit it past him, though, aren’t his real worry. The troubles for Woods are within, and he’s been dealing with different varieties of them ever since his infamous wreck over Thanksgiving weekend in 2009.

His personal life now seems stable, or at least it did Wednesday when his children, 6-year-old Charlie and 7-year-old Sam, joined him and girlfriend Lindsey Vonn for the par-3 contest he hadn’t played in 11 years. His swing seems better, too, at least better than two months ago when he fled Torrey Pines mid-round, mumbling something about his glutes not being properly activated.

And while he’s notoriously thin-skinned, Woods said he no longer reads anything written about him or listens when analysts talk about how shockingly bad his game has been.

Woods certainly looked comfortable again as he played the back 9 earlier Wednesday with Spieth and Crenshaw. He asked to join them as they teed off, something that would have been unheard of back in the day when he largely practiced by himself.

Woods said he spent the last two months at home, working from morning to night on his game. He talked about finding the right release pattern and seems convinced he ironed out his problems.

He comes back at a place he knows well, on a course where he almost always seems to be in the mix. But he hasn’t played a full tournament since the British Open last year, and playing in the Masters is a lot different from practice rounds back home.

Woods tees off in the penultimate group Thursday, with all sorts of questions that remain to be answered. Nobody has any idea whether this will be another train wreck or a celebratory romp.

About the only thing for certain is that we’ll be watching every move he makes.