Masters: Spieth spectacular in Round 1 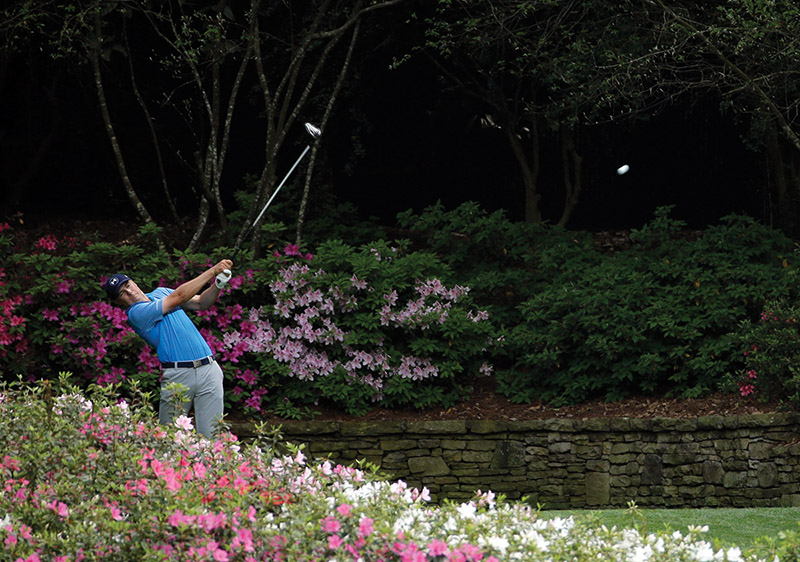 The Associated Press Jordan Spieth tees off on the 13th hole during the first round of the Masters on Thursday in Augusta, Ga. Spieth shot an 8-under 64 to lead after the first round.

He kept right on going at the Masters.

The 21-year-old Texan turned in a brilliant opening round at Augusta National, challenging the major championship scoring record on the way to an 8-under 64 Thursday.

Spieth birdied eight of the first 14 holes, his shots so precise that he often had nothing more than tap-ins with the putter. He rolled in a 6-footer at the 12th, a 2-footer at the 13th, then nearly holed out from behind a tree along the 14th fairway, the ball striking the flagstick before settling about 2 feet away for another easy birdie.

He went to the par-5 15th with a shot at the scoring record for any major, which is 63. But he picked the wrong club, muscled his second shot through the green, leading to his only bogey.

Spieth finished with a flourish, rolling in a 20-foot birdie putt at the 18th.

“Eight under here is nothing to complain about,” Spieth said. “Just in the zone and hitting some shots. I saw the scoreboard and tried to make a push.”

Australia’s Jason Day also made quite a push, ripping off five straight birdies to get to 6 under before a bogey at the 17th ended his hopes of catching Spieth.

Playing the Masters for the first time since 2011, Charley Hoffman went out in the first group of the day and shot 67, a score that was matched by a resurgent Ernie Els and 2013 U.S. Open champion Justin Rose.

Plenty of others took advantage of prime scoring conditions on a sunny spring day, the greens a bit soft even as the temperatures climbed into the upper 80s, with barely a hint of the breeze that can cause so much havoc.

Rory McIlroy, trying to complete a career Grand Slam after winning the final two majors of 2014, had a couple of sloppy shots but still shot 71. So did defending champion Bubba Watson, even though he admittedly tired down the stretch and lost focus.

Russell Henley, a Georgia native with plenty of fans in the gallery, turned in a 68. Bill Haas, Webb Simpson, Paul Casey and Ryan Palmer were at 69. Sergio Garcia was also in the mix at 4 under.

Spieth was thinking big when he put his tee shot in the middle of the fairway at the 15th, giving him a good shot at a birdie and maybe even an eagle.

“I was in between hybrid and 4-iron,” he said. “I knew if I could birdie there, I could get to 10 (under) on the day and I’ve never shot 10 under in a professional round in my life. Obviously here, that would be pretty special. Unfortunately, I took the wrong club.”

That was about the only thing that went wrong all day.

Then there’s Tiger Woods, returning to competitive golf for the first time since he walked off the course at Torrey Pines in early February, saying he needed to improve his game before he played again.

Woods clearly improved during the time away, but doesn’t yet seem capable of making a serious run at his 15th major championship. He struggled to a 73, leaving him nine shots behind Spieth going to Friday and more concerned with making the cut than contending for the lead.

There was a wild tee shot at No. 9 that wound in the adjacent first fairway, followed by a shot into the pine trees that prompted Woods to swing his club in anger — a flash of his notorious temper. He was cursing himself again at the picturesque 12thl, where he dunked his ball in Rae’s Creek and took another bogey.