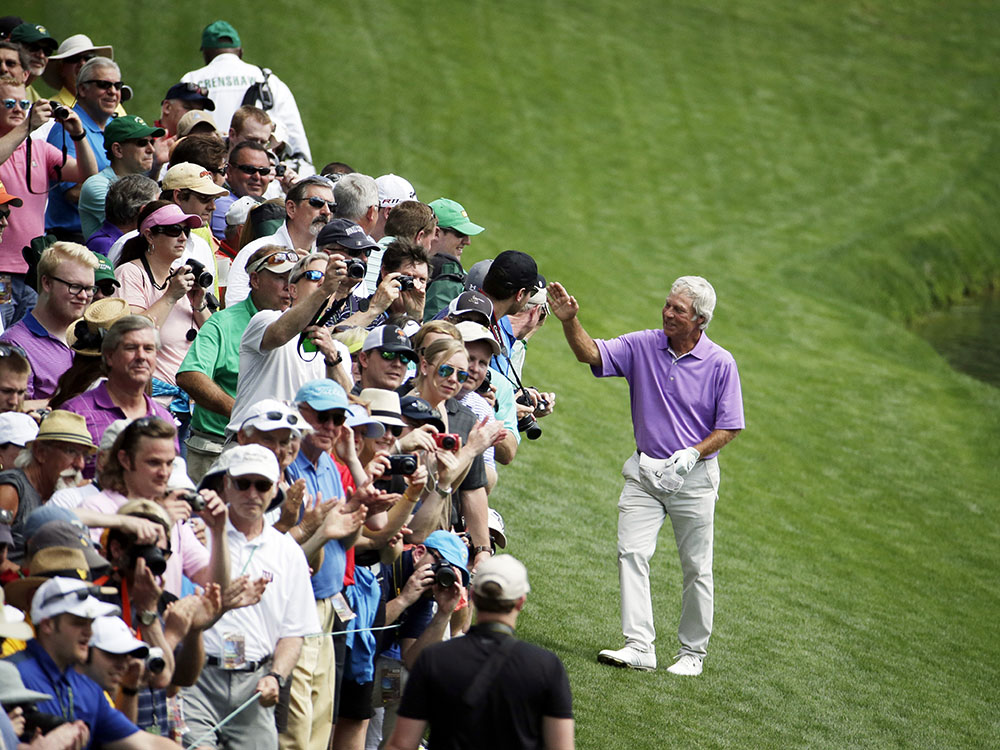 AUGUSTA, Ga. (AP) — Tiger Woods and Jordan Spieth were already on the 18th green, ready to hit a few putts. Ben Crenshaw was back down the fairway, still 100 yards or so away, after driving his tee shot into a tree.

“I probably should have stopped playing a couple of years ago,” Crenshaw moaned Wednesday, standing outside the Augusta National clubhouse after getting in nine holes.

The two-time Masters champion will finally put away his clubs at age 63, after playing the tournament one last time with long-time caddie Carl Jackson by his side.

At every hole, they’ll be remembering all the good times. The first green jacket in 1984. The out-of-nowhere victory in 1995, when Crenshaw collapsed into tears after making the final putt, remembering his mentor, Harvey Penick, who passed away just days earlier.

It was a touching scene — Crenshaw buckled over, face buried in his hands, while Jackson came up from behind to provide a consoling pat on the back.

“A lifetime is going to flash in front of me,” Jackson said.

Crenshaw’s final Masters will be his 44th, tied with Sam Sneed and surpassed by only four other players — Gary Player, Arnold Palmer, Doug Ford and Raymond Floyd.

“I started thinking a while back about this week,” said Crenshaw, never one to hide his emotions and sure to shed a few more tears before this week is out. “I’m going to get through it the best way I can.”

Crenshaw’s last official practice round at Augusta National was one of the ages. The fading veteran was joined by Woods, the middle-aged star trying to recapture his form at age 39, and the up-and-coming Spieth, only 21 but already one of the top players on the PGA Tour.

“That’s the way life goes,” Crenshaw said. “Those guys are so strong, so young, so eager. We all remember when we felt like that.”

“You know how particular I am,” Crenshaw joked.

After playing the back side, down through Amen Corner and back again, Crenshaw grabbed some lunch, rested up a bit, and headed back out for the Par 3 Contest. He played with Jack Nicklaus and Gary Player, a worthy fill-in for 85-year-old Arnold Palmer.

“You know how special this place is,” Crenshaw said. “I love everything about it. Always have.”

Back in 1972, when Crenshaw qualified for his first Masters as an amateur, the ceremonial first shots were hit by Jock Hutchison and Fred McLeod.

“Freddie McLeod won the 1908 U.S. Open, and I think Jock won the 1921 British Open,” Crenshaw said, showing his extensive knowledge of golf history. “They were 88 and 86, respectively. That was one of my dear memories. They hit it off and went down the hill.”

Crenshaw will be remembered for his relationship with Jackson, stretching back to the days when the Masters required every player to use one of the club’s caddies. When that changed, most players started bringing their regular loopers. But Crenshaw always stuck with Jackson, gleaning every little bit of his extensive course knowledge.

There was no way he was missing this one.

“Carl means as much to what I’ve done here as me,” Crenshaw said.

In all likelihood, they’ll go out together Friday afternoon. While Jackson talked optimistically about somehow finding a way to make the cut — “I know how a chipper and putter can play around this place” — his friend was more realistic.

Crenshaw hasn’t played on the weekend since 2007, hasn’t broken 80 since the opening round three years ago.

“I’m making the right decision,” he said, “in so many ways.”