College women’s basketball: Wike on the mend from labrum surgery 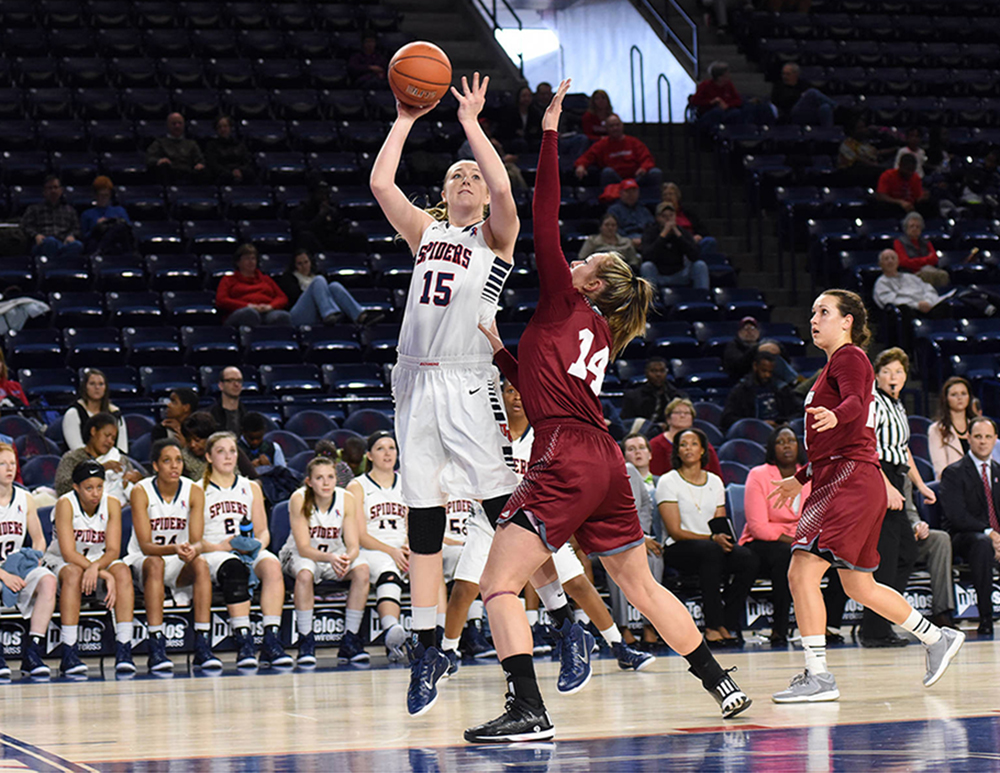 Courtesy of Richmond Athletics Richmond's Karleigh Wike (15) shoots over a defender during the 2014-15 season. Wike was the first post player off the bench in her freshman season. She underwent surgery to repair a torn labrum in her right shoulder. The recovery time is 4-6 months.

Wike, who starred at East Rowan, is familiar with torn labrums. Her cousins, for East Rowan baseball players Noah Holmes and Roby Holmes, both experienced labrum surgery on their throwing shoulders.

Labrum issues are most common among baseball and tennis players, but Wike had her own struggles beginning with Richmond’s preseason practice.

“It was about a week into practice and we were doing Marine Corps extension exercises and I dislocated my shoulder and had to go to the hospital,” Wike said in a phone interview. “I was in some pain and the coaches discussed having surgery and just redshirting this season.

“They left it up to to me, but they really wanted me to try to play. Our post players were seniors, and they wanted me to get some playing experience that would benefit me next year.”

Everyone warned Wike it is a major adjustment from high school to Division I basketball. Wike realized it’s an adjustment playing against players as tall as she is, and she was aware the speed of the game increases dramatically. Still, the jump to the college ranks stunned her.

“It was amazing how strong the post players were, and I mean the girls I was practicing against,” Wike said. “They’ve been in the program conditioning and lifting for years, and it makes such a difference. I can’t over-stress how overwhelming the physical adjustment was.

“I’m not going to lie about it, it was very hard, my body was so tired, and I was miserable. Basketball was not fun at all. I dreaded going to practice.”

She adapted. Her labrum injury was an obstacle, but it wasn’t insurmountable. Her smile slowly returned. Her love of basketball came back.

“My shoulder was dislocating literally at every practice, and each time the labrum would tear a little more,” Wike said. “But I got used to that. Gradually I got the hang of it. I learned the plays. I started doing better. It really helped when I started to see a little progress.”

Playing for coach Danielle Porter at East Rowan, Wike was one of the outstanding players in school history, graduating with 1,170 points, 1,291 rebounds and 477 blocks, a school record that could last forever. East Rowan won the South Piedmont Conference her senior season, and she was named to the 3A All-State team.

Wike’s statistics from her freshman college season — 28 points, 27 rebounds, eight blocks — don’t sound like much. She isn’t discouraged. She played in 26 of 33 games for the Spiders, who went 19-14. He season is highlighted by scoring eight points in 11 minutes in a win against UMass.

“UMass was the game I scored the most, but I was more excited about Dayton and George Washington,” Wike said. “They were the best teams in our league (Atlantic 10)  and had really good post players. Being able to defend and rebound and help the team, even if I didn’t score, meant I was contributing. To be the first post player off the bench in games like that meant a lot.”

Richmond was invited to the Women’s NIT and played two exciting road games — a one-point win in Florida at Stetson and a one-point loss to Duquesne in Pittsburgh.

Academically, Richmond is as challenging as Wike expected. Professors don’t give breaks to basketball players. They’re expected to stay on top of assignments even when the travel demands of basketball make it impossible to physically attend class.

“We got snowed in quite a few times up north at away games and missed classes,” Wike said. “School is very demanding.”

Wike aspires to go to law school, but she also has basketball goals. She expects to make a bigger impact as a sophomore, especially as a sophomore who is healthier, wiser and stronger.

She started rehab curling exercises with her left hand the day after surgery. She’s looking forward to being able to lift her right arm. The recovery timetable she’s looking at is 4-6 months.

“The team is traveling to Europe in August for 14 days and four games,” Wike said. “I want to be playing.”