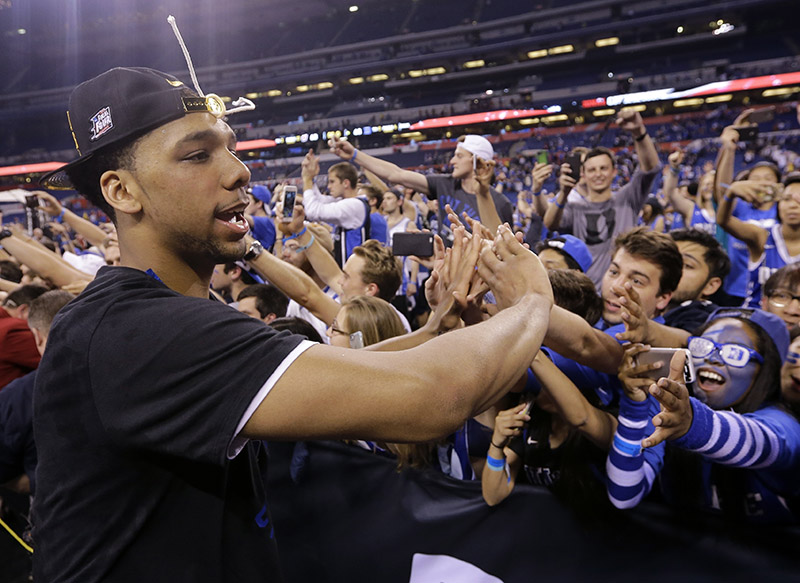 The Associated Press Duke's Jahlil Okafor celebrates with fans after his team's 68-63 victory over Wisconsin in the NCAA championship Monday in Indianapolis. Okafor announced Thursday he intends to enter the 2015 NBA Draft after one season in a Blue devils uniform.

DURHAM, N.C. (AP) — No surprise and no suspense from Jahlil Okafor: The Duke freshman is headed to the NBA.

The 6-foot-11 All-American announced his decision Thursday, saying he will fulfill one of his earliest childhood dreams.

“As early as I can remember, I’ve fantasized and dreamed of the day that I could play professional basketball,” Okafor said in a statement issued by the school.

“This is a tremendous opportunity for Jahlil and he has earned it,” Krzyzewski said. “Obviously, he has done an incredible job here at Duke and he will always be a part of our Duke basketball family. We could not be happier for (him) and his family.”

The announcement came three days after Okafor led Duke (35-4) to its fifth national championship, a 68-63 victory over Wisconsin in Indianapolis on Monday night.

It also caught no one off guard.

Okafor arrived at Duke last summer as one of the nation’s top recruits, and was widely assumed to become the latest one-and-done player produced by the school.

He was both a preseason and postseason AP All-America selection, averaged 17.3 points and 8.5 rebounds and shot 66 percent — all team bests — and became the first freshman in Atlantic Coast Conference history to be named league player of the year. He also led the team with a 15-point average during the NCAA Tournament.

And while he told reporters Wednesday that “it would kind of suck” to only get to play a few months alongside longtime friend Tyus Jones, he said whatever he decided would have to be a “business decision.”

“My freshman year has been an amazing experience, to say the least,” Okafor said. “It exceeded my expectations! I love Cameron and Duke University! I can’t thank my coaches, teammates and family enough for making this year so special and helping me grow on and off the court.”

Okafor becomes Duke’s sixth one-and-done player and its fourth in five years, with the most recent additions to that club being Kyrie Irving, Austin Rivers and Jabari Parker.

There could be more: Two of Okafor’s classmates — Justise Winslow and Jones, the most outstanding player at the Final Four — also are serious candidates to jump to the pros.