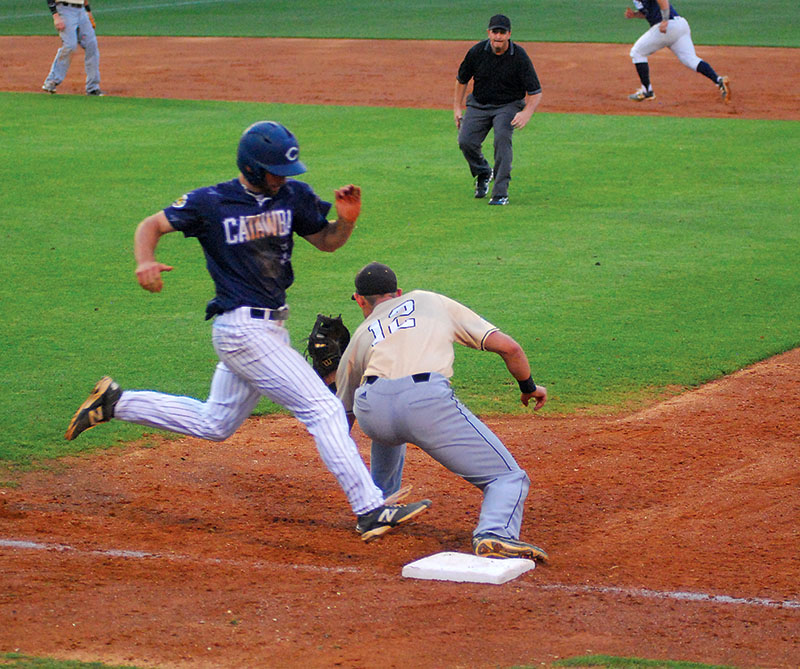 SALISBURY — National Hitter of the Week Will Albertson and cleanup man T.J. Wharton have done major damage for Catawba this season, but the offense still is triggered by leadoff man Blake Houston.

The Indians (31-8) are 26-3 when Houston scores at least one run, and they’re 5-5 when he doesn’t score. Houston didn’t cross the plate Wednesday at Newman Park, and Catawba was whipped 9-2 by UNC Pembroke.

Not only was Houston 0-for-4, so was No. 2 hitter Kyle Smith, another capable lefty stick. Jordan DeLoatch, the southpaw starter for UNC Pembroke who worked seven innings, was the key man in the game. He kept Catawba’s table-setters off the bases.

DeLoatch hadn’t won a game all season. His ERA when he got off the bus in Salisbury was over 6.00. But he looked confident and sharp, inducing one groundball after another. Even Albertson, who rarely takes an ugly swing, looked off balance.

“DeLoatch pitched outstanding against a quality opponent,” UNC Pembroke coach Paul O’Neil said. “He made a lot of quality pitches to the guys at the top of their lineup. I kept yelling at him that he had to get that No. 2 hitter out. We didn’t want Albertson and Wharton up there with men on base where they could drive in multiple runs.”

It was a game Catawba desperately wanted to win. It was a South Atlantic Conference team against Peach Belt team, and the Peach Belt more often than not gets more teams in the Southeast Regional tournament. Catawba wanted to make a statement for the SAC, but the Indians failed to make it.

“They got a quality start and we didn’t and they played good defense and we didn’t,” Catawba coach Jim Gantt said. “Sometimes it’s as simple as that. That’s a very good team. They were better than us today.”

UNC Pembroke (27-9) got three hits each from Drew Cole and Drew Beaver. The visitors built a 4-0 lead after two innings against Catawba starter Matt Farmakis.

Catawba’s Avery Bowles was outstanding in long relief, shutting down the visitors in the third, fourth, fifth and sixth. He gave the Indians a chance to come back, but they couldn’t.

Bryce Fowler’s double to the wall, and a two-run homer by No. 9 hitter Luke Setzer accounted for Catawba’s runs. Setzer hit a blast in the third.

“The lefty was mixing up speeds well and he kept us off-balance,” Setzer said. “I was able to barrel one up with two strikes on me, and it left the park.”

Catawba had a chance in the sixth when Albertson reached on a two-out error and Wharton smoked a double to put runners at second and third, but DeLoatch got Craig Brooks to bounce out to shortstop on a changeup.

The late innings often belong to Catawba, but the Braves kept adding runs, including one on a homer by slugger Collins Cuthrell off lefty reliever Sean Grant. Two hard-throwing UNCP relievers mowed down the Indians in the eighth and ninth.

“It was just a tough day,” Setzer said. “They got us in a hole early, and it’s tough to come back against a good-hitting team.”

Down the road, the teams could meet again in the regional. O’Neil won’t be surprised at all if that happens.

“Catawba is one of the best teams we’ll play this year,” he said. “We’ve played a lot of the SAC teams, and they’re by far the best in their league. They play baseball the right way. There’s a reason they win 30 — or 40 — every year.”