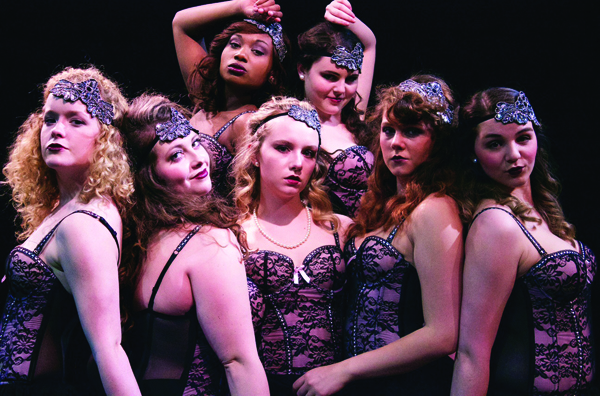 “When you see a guy reach for stars in the sky

You can bet that he’s doing it for some doll…”

Catawba College Theatre Arts presents Guys and Dolls April 16, 17 and 18 at 7:30 p.m. and April 19 at 2:30 p.m. in Keppel Auditorium in the Robertson College-Community Center on the Catawba College campus.

Their only option is the Biltmore Garage, which will happily be at their disposal … for a thousand bucks. Unfortunately, Nathan and his goons just don’t have that kind of cash.

Enter Sky Masterson, a notorious gambler who lives for the game. Desperate for cash, Nathan bets Sky, an infamous lady-killer, that he can’t take any woman Nathan choses to Havana. Always ready for the thrill and confident in his charm, Sky accepts. Eternally sly, Nathan chooses prude Sarah Brown, the sergeant at the local “Save A Soul” mission. Sky is devastated, but refuses to admit defeat. Hilarity ensues as Sky tries his best to enchant Miss Brown and Nathan’s gang juggles through their quandary of games, girls, and gangsters.

Directed by theatre arts professor Joe Hernandez and assistant directed by first-year B.F.A. directing student Peyton Glendenning, Catawba Theatre peels back the layers of these famous characters and giving audiences a glimpse into the reality and grit of the 1920s on the brink of the depression.

Despite its iconic period setting, this piece is relatable across time to audience of all ages with its underlying messages of fall in squalor and redemption through love.

Join us on the Catawba College campus as our beloved melee of characters chase, dance, march, gamble, and even strip their way through the crazy streets off Broadway and all the way down to Cuba in Frank Loesser’s golden musical “Guys and Dolls” in a way you’ve never seen it before.

Tickets are $15 for general admission and $13 for non-Catawba students and senior citizens. “Guys and Dolls” is a solid bet for a great night of entertainment.

Tickets are available at the box office at -704-637-4481 2-5 p.m. on week days or online at www.catawba.edu/theatretix. Tickets may also be purchased at the door. This is show is recommended for a PG-13 audience.