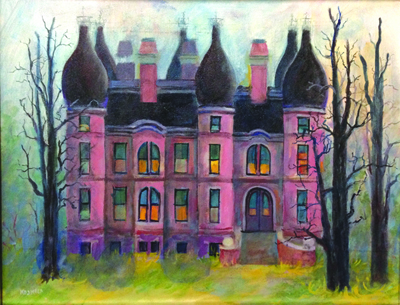 Rail Walk Studios & Gallery will host an Exhibition of art by Kenneth Koskela during the month of April.

The exhibit will include original watercolors, etching and oil paintings. Visitors may view the works during Rail Walk’s public hours 11 a.m.-4 p.m. Thursdays – Saturdays, April 2 – 25. The opening reception Friday, April 10, from 6-8 p.m. to meet the artist and enjoy light refreshments while viewing his delightful art. Rail Walk Studios & Gallery is located at 409-413 N. Lee St. in the historic Railwalk Arts District. The exhibit and reception are free and open to the public.

Koskela has studied and taught studio art but has not let his knowledge of art “rules” hamper his ability to find his own charming, whimsical, and very original voice. He says that his primary inspiration for art is his love of Victorian homes which he includes in many of his pieces along with a cast of characters based on experience and pure imagination.

As a tribute to his love of Victorian architecture, he has included an exhibit of photographs and floor plans of three Victorian homes that he has visited and used as inspiration.

When discussing his memories of these three structures, Koskela relayed a story of his escapades in one of them. The home, built around 1890 in Chicago, had been home to Potter Palmer who was builder of the Palmer Hotel and founder of Marshall Fields Department Stores. Palmer had a huge collection of French Impressionist art which he donated to the Art Institute in Chicago. Decades ago, armed with his camera, Koskela set off to explore the then dilapidated structure but found it locked.

Noticing a group of kids appearing to be going in and out he chided them and sent them on their way but not before finding out that their secret entry was underneath the porch where he himself gained entry. He was delighting in lovely craftsmanship of mahogany paneling, elaborate fireplaces and hand-lettered family motto “Well befall hearth and hall” painted at the end of a huge entry hall when he heard officials entering the premises.

Slipping quietly and quickly upstairs, he eventually hid in an upstairs closet where he was discovered by the two men. One wanted to have him immediately arrested for trespassing but the other spotting his camera and gentlemanly demeanor invited him to the office where he was allowed to look at floor plans and learn more about the home.

The Palmer house was demolished in 1954 to make way for an apartment house.

The O.M. Barnes House in Lansing, Michigan was built around 1910 and torn down in 1955 to build “an ugly modern Place.”

Exeter, a plantation house in Leesburg Virginia, was built in 1774. Martha Washington’s nephew lived there for a long time. Kenneth lived there from 1969-1974.

That house burned down in 1978. Memories of each of them can be spotted in many of Koskela’s paintings.

Several of the artists also teach lessons and occasionally host workshops. Parking is free and plentiful. For more information, visit www.railwalkgallery.com or call 704-431-8964.