Around the Track: Penske on top of the game 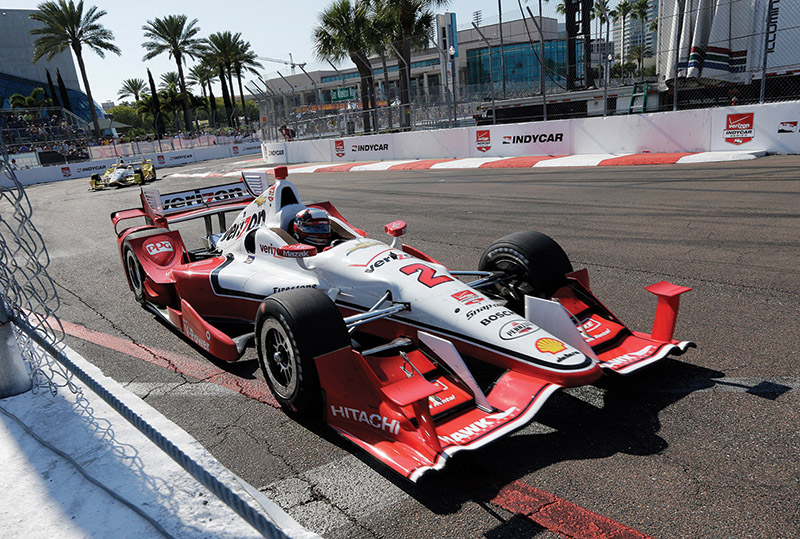 FORT WORTH, Texas (AP) — The top of the U.S. racing world is crowded with Roger Penske’s drivers, whether in open-wheel or stock cars.

When Juan Pablo Montoya took the checkered flag to win the IndyCar season opener, he was followed immediately across the line by his pole-sitting teammate, defending series champion Will Power.

Only one car was between them and Team Penske’s other two drivers, with Helio Castroneves finishing fourth and Simon Pagenaud fifth in his team debut at St. Petersburg, Florida.

“When I look at the IndyCar side, we’ve got four very strong drivers. … We keep finding little things and it just works together. It’s the same on the NASCAR side,” Power said. “That comes from the top. That’s how Roger runs his businesses, and that’s how the racing teams are run as well.”

On the same day in Martinsville Speedway in Virginia, Brad Keselowski finished second just ahead of polesitter and teammate Joey Logano in the Sprint Cup race.

So in two races over a span of hours more than 700 miles apart, Team Penske had two polesitters, one win and top-five finishes for all six of his drivers.

“That’s stuff that we’ve never done before,” Logano said. “For Team Penske to be able to do that, that was a big deal. … Hopefully we just continue that momentum throughout the season.”

Six races into the season for NASCAR’s top-tier series, Logano is second in points and Keselowski fourth — and both have already won a race, pretty much ensuring them a spot in the season-ending championship Chase.

After both series were off last weekend, the Sprint Cup drivers get back at Texas, where Logano is the defending champion of the track’s spring race and has an average finish of 6.4 over his last five starts. Keselowski’s average finish in that span is seventh, including third last fall.

IndyCar is in New Orleans for its inaugural race there and second race this season. The open-wheel series’ last four debuts at new tracks were won by current Penske drivers.

Power was three times the IndyCar season runner-up before winning the championship last year, when Castroneves was second for the fourth time in his career. They expect Team Penske to contend for another title in 2015.

“I have a feeling the championship is going to come down between the four of us. It’s a good problem to have,” Power said, then chuckling when asked about the collective IndyCar group. “It’s quite funny when a Frenchman, an Aussie, Colombian, Brazilian — a lot of miscommunication, all the different accents. … It’s fun, they’re all really good drivers, and Roger seems to only employ people with heaps and heaps of experience.”

Castroneves is a three-time Indianapolis 500 winner, while Montoya won the 2000 Indy 500 and was the Sprint Cup rookie of the year in 2007 during his time in stock cars for Chip Ganassi. Pagenaud has a relationship with former Penske driver Gil de Ferran and finished top five the past three seasons for Sam Schmidt.

“We’re learning off each other,” Power said. “It’s really created this atmosphere where we just push each other so hard. I think that’s the big part of why we’re doing well.”

This is the first time Penske has fielded four full-time cars in the IndyCar Series.

On the Cup side, 2012 season champion Keselowski led the series last season with six wins, and Logano won five times.

Logano opened this season winning the Daytona 500 and has finished top 10 in every race. Keselowski has five straight top 10s, including a win at California and the second-place finish at Martinsville.

Like Power, Logano points to team owner Roger Penske as the motivation.

“He wants to be the best at it, and that trickles down to the whole company. When your leader is like that, you want to be like that, and it forces you to be like that,” Logano said. “That’s the type of boss you want to have. As a race car driver, you want an owner that’s willing to do whatever it takes to win races, and he wants to have a driver with the same attitude.”

ALL-STAR CHANGES: NASCAR is making changes to its All-Star Race, opening the field to more potential drivers and adding laps to the four segments that precede the final 10-lap shootout for $1 million.

The changes announced Wednesday include letting every former All-Star Race winner and past Sprint Cup champion who still race full-time take part with race winners from the 2014 and 2015 seasons. Previously, former All-Star winners and Cup champions were eligible only if they had accomplished those feats in the past 10 seasons.

Five laps will be added to each of the first four segments, increasing them from 20 to 25 laps. With the final 10-lap shootout, the race will now be 110 laps.

“These updates were made to ensure that our fans have every opportunity to see the best drivers in one of our crown jewel events and give them even more on-track action,” said Steve O’Donnell, NASCAR executive vice president and chief racing development officer.

TEXAS TIRE BARRIERS: About 250 feet of new tire barriers are in place for this week’s races at Texas Motor Speedway, where there was already a SAFER barrier system on most walls at the high-banked, 1½-mile track.

Tire barriers were added to five inner wall areas, the longest being about 115 feet near the exit of pit lane. There are also 30-35 feet of tire bundles near the pit lane entry, the jet truck staging area in Turn 1 and emergency vehicle cut-out areas in turns 1 and 4.

About 450 tires were used for the project recommended by NASCAR officials.

“We always follow their advice on safety matters, but they requested we only add 250 feet of tire barriers. Considering that the inside wall and outside walls total almost 16,000 feet, adding 250 feet of tire packs is a minor addition,” track president Eddie Gossage said. “To me, that means NASCAR found the track to be extremely safe.”