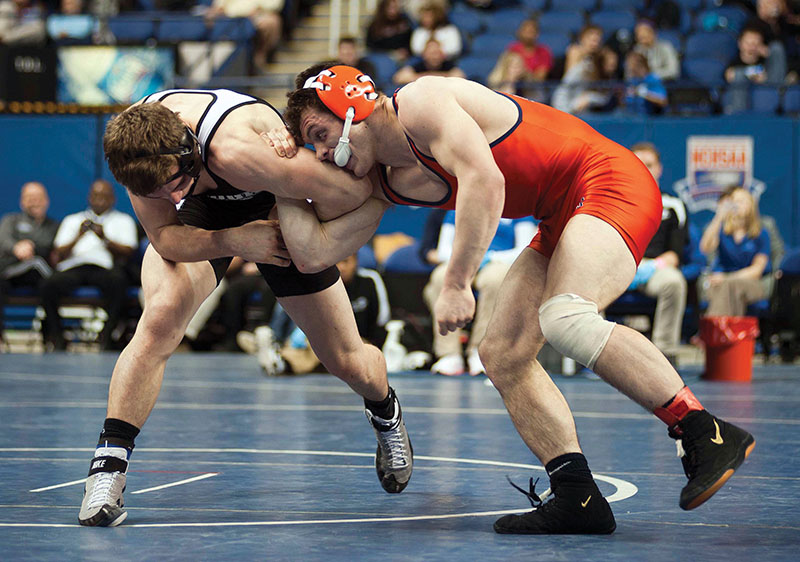 FILE PHOTO BY JON C. LAKEY / SALISBURY POST Carson High School's Brandon Sloop emerged as a state champion in the 3A finals after defeating Rockingham County's John Harris with a score of 2-1. Sloop was the winner of the Rowan County coaches' vote for the winner of the Dutch Meyer Award as the county's wrestler of the year.

SALISBURY — Brandon Sloop rushed for 4,824 yards as a Carson running back, was a 1,000-yard rusher three times and scored 41 touchdowns.  He was the No. 3 rusher in Rowan County history.

Those football numbers provide insight into the kind of athlete Brandon Sloop is, but he was an even better wrestler. While he poured every ounce of energy he possessed into Carson football from July to November, he always was a wrestler first.  Wrestling is his passion and his future, and wrestling is the sport in which he became a state champion.

Sloop was voted the Dutch Meyer Award winner by Rowan County’s wrestling coaches and is the Rowan County Wrestler of the Year.

The competition was beyond tough because South Rowan’s Logan Durham, the 2014 Dutch Meyer Award recipient, went undefeated again and added a 113-pound 3A state title to last season’s 106-pound crown.

Yet, Sloop, who went 40-3, was the choice of the county coaches for an amazing display of the qualities valued most by wrestling coaches — competitiveness, perseverance and toughness. It’s astounding, but Sloop wrestled his entire championship season with a torn ACL.

The injury occurred in the next-to-last game of the Cougars’ football season, a rainy 44-36 loss at Hickory Ridge. It was one of those dreary, weather-plagued affairs that took two nights to complete.

“I felt a pop in the knee, but I didn’t think it was that bad,” Sloop said. “My thinking was to ice it and brace it and make it through the season.”

He was half-speed for Carson’s ugly season finale against Cox Mill, bobbing, weaving and hobbling for 73 yards on 18 carries. Carson had a chance to make the playoffs, so he wasn’t going to let down his teammates or coaches. He gave 100 percent of whatever percentage it was that he had left to give.

And then it was time to wrestle.

“He’s just the type of athlete who wasn’t going to be denied,” Vandenberg said. “He lived in the gym. He did extra work.”

Sloop plays football at 192 pounds. As a junior, he cut down to 160 pounds and finished third in the 3A state tournament.

“I knew I wasn’t going to try to cut that much weight again,” Sloop said. “But I got down to 170 and felt pretty good.”

The knee bothered him some, but Sloop is so strong the muscles compensated. He was halfway through the season before he had to admit he had an injury that went beyond normal pain. He hoped it was just a meniscus tear, but he feared the worst.

“I knew something was wrong and finally went for an MRI,” Sloop said. “But I already knew that whatever the results were, I was still finishing my senior season. This was my last shot. Nothing was going to stop me.”

Sloop had the knee braced for practices. He wrestled matches with the knee taped, but without a brace.

Sloop was named Most Outstanding Wrestler in the South Piedmont Conference Tournament, rolled through the Midwest Regional, and was ready for his fourth straight trip to the state tournament. He finished fourth as a sophomore. That, as well as his third-place finish as a junior, motivated him as he made his last push.

“I’d lost in overtime in the semifinals as a junior,” Sloop said. “I’d been close.”

Sloop faced a series of draining, challenging matches in the state tournament, but he fought through all of them. That includes a 2-1 decision in the title match over Rockingham County’s John Harris. Sloop got his first point on an escape in the second period, and the winning point came when Harris was penalized for stalling.

“They were all tough, but the final was, by far, the toughest of all, “Sloop said. “I pulled through. It made all the work I’ve put in worthwhile.”

“Even then, you could see he was pretty special,” Pittman said.

A four-year captain, Sloop finished with a career record of 154-23. Vandenberg said that’s the most wins in school history.

“His senior year was all about will.” Vandenberg said.