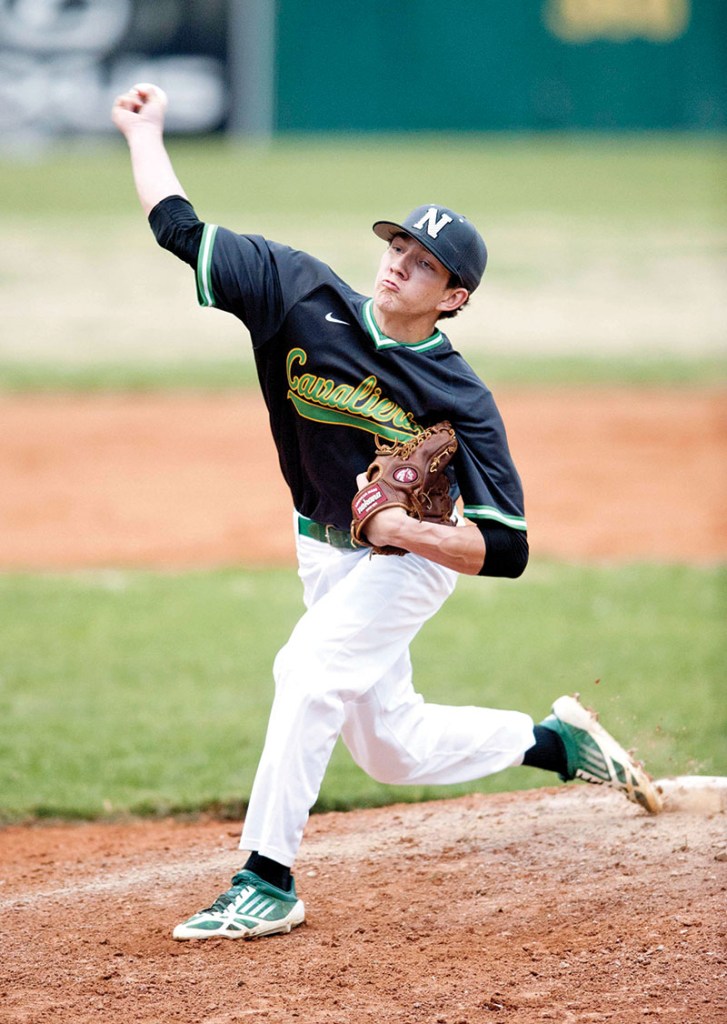 JON C. LAKEY / SALISBURY POST North Rowan’s Cory Fries (6) was forced into duty after North Rowan starting pitcher Brandon White was injured in the top of the first inning. Fries tossed 6-1/3 innings on Tuesday as the Cavaliers defeated the Hornets 11-4 at Robertson Field.

He watched rival Salisbury score 33 runs in three games while winning the F&M Bank High School Baseball Classic in Kannapolis over the Easter break, and he wasn’t looking forward to playing the Hornets Tuesday night at Robertson Stadium.

“Salisbury was a scary team in that tournament — they were knocking teams out early,” Rimer said. “They came in so hot, what I really wanted tonight was a rainout. I was hoping rain might cool them off.”

Instead it was North Rowan right-hander Cory Fries who cooled off the Hornets. The Cavaliers did everything right, Salisbury did just about everything wrong, and the Cavaliers won the Central Carolina Conference meeting 11-4.

Fries (2-2) was supposed to play shortstop, but when North Rowan starting pitcher Brandon White, who beat the Hornets 2-1 last year, got hurt rounding first base in the top of the first inning, Fries had to take the mound.

Fries stayed on the mound until he ran into trouble in the seventh. Joe Harrison relieved and got the final two outs.

“I think I actually do better pitching if I don’t know I’m going to pitch,” Fries said. “I didn’t have time to stress or worry about it. I needed to pitch, so I pitched.”

The key moment came in the bottom of the second. It was 1-1, and Salisbury had a runner at first when Harrison Smith hammered a grounder up the middle on a hit-and-run. Corbin Smith was the right fielder on the lineup card, but he’d moved to shortstop to replace Fries. He  gloved that hot grounder, a certain base hit, behind the bag and flipped to second baseman Trey Stoner, who turned a double play. That was a momentum turner for the Cavaliers.

“We were in some tough positions early in the game,” Corbin Smith said. “But we made plays in the field, and then Cory pitched a great game. This was the best all-round game we’ve played all year.”

The Hornets (9-4, 1-2 CCC) were their own worst enemies, donating six errors to help North Rowan’s offense.

“I don’t know that they hit a ball out of the infield until the fifth inning, but we just can’t play any worse defensively than we did,” Salisbury coach Scott Maddox said. “It was pretty frustrating. I don’t know if we played so bad because we got caught up in that whole Salisbury vs. North Rowan thing or if it was just one of those days.”

North Rowan’s offense was effective without being impressive. Using walks, well-executed bunts and aggressive baserunning, the Cavaliers scored in six of their seven innings. Tyler Shepherd’s RBI groundout in the fourth scored Rob Monroe, broke a 3-all tie and gave the Cavaliers (7-6, 3-0 CCC) the lead for good.

Harrison’s RBI single in the fifth made it 5-3.  Noah Gonzalez’s sac fly made it 6-3. North Rowan broke it open in the sixth, scoring three runners from third base with bunts.

“Salisbury is good, but I thought we kept constant pressure on their defense, and we brought the fight to them,” Rimer said. “We had total focus and we fought on every at-bat. Javin (Goodine) and Henderson (Lentz) made (Salisbury starter Riley) Myers throw a bunch of pitches.”

Myers (1-2) lasted five innings, but it was the Cavaliers’ night.