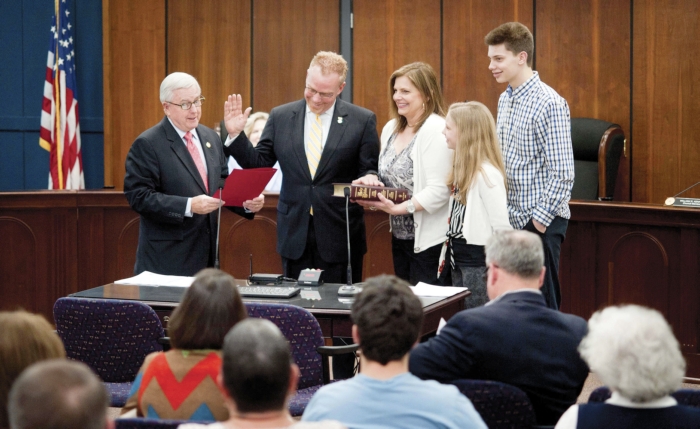 Salisbury mayor Paul Woodson swears in W. Lane Bailey as the new city manager during the city council meeting on Tuesday. Bailey was joined by his wife Ruth and their two children, Brennan and Katherine, during the ceremony. JON C. LAKEY / SALISBURY POST

Lane Bailey was accompanied by his wife, Ruth, son, Brennan, and daughter, Katherine, as he recited the oath given by Mayor Paul Woodson.

Bailey has 25 years of experience in government administration. Before coming to Salisbury, he was the city manager of Lenoir for over 10 years. He has also been a county manager.

Bailey, whose annual salary starts at $150,000, thanked his family for their support and mentioned Treme in his remarks after being sworn in, calling him a mentor and someone he has admired.

Bailey said Salisbury has the people and pieces in place to be successful.

Woodson said he’s looking forward to the city’s future with Bailey at the helm.

Council approved plans for a Home 2 Suites hotel on Jake Alexander Boulevard between the Econo Lodge hotel and the Interstate-85 on-ramp.

The land parcel for the hotel is small — 1.43 acres — and the developer, Narsi Properties requested the hotel be six stories to accommodate 93 rooms. The property is zoned commercial mixed use, which limits buildings to four stories — anything higher needs to be approved.

Due to state Department of Transportation regulations, no left turns will be allowed in or out of the hotel’s parking lot, and the developer will to pay to have a median installed on Jake Alexander Boulevard to prevent left turns.

Council also approved a request to allow “daycare” as a permitted use for property with an office building on it off Statesville Boulevard.

The ARC of Rowan plans to start an after-school program for middle schoolers and high schoolers with intellectual disabilities at the building at 108 Dorsett Drive off Statesville Boulevard.

Also, Council approved changes to the plans for the school system’s new central office on North Main Street. Windows will be added to the north face of the building now that the Shulenburger house has been demolished. The land parcel that the house sat on has been split, with a portion going to the school system and the rest going to Richard’s Bar-B-Q on the adjacent lot.

No one spoke in opposition to any of the proposed plans during the public hearings.

In other business Tuesday, Council:

• adopted the 2015-2019 consolidated plan for Housing and Neighborhood Revitalization and the 2015-2016 Action Plan for Community Development Block Grant and HOME program funds.

For the five-year plan, the city wants to focus on the West End, East End, Jersey City and Park Avenue neighborhoods.

The city has $406,000 in federal funds to use in the next fiscal year on programs including home rehabilitation, the Civic Park Apartments redevelopment and organizations that assist those in need.

• approved a request for a predevelopment site grading permit for 685 Julian Road. Dirt from the site, which is five acres, will be removed and used at another site. The Julian Road site will eventually be level with the street and ready for potential development.

• approved a supplemental agreement with the North Carolina Department of Transportation regarding bicycle lanes and sidewalks on Newsome Road between Stokes Ferry and Bringle Ferry roads. The bike lanes have already been approved, and this new agreement allows sidewalks to be built along one side of the road.

• went into closed session for a little more than an hour to consult with an attorney. No action was taken afterward.