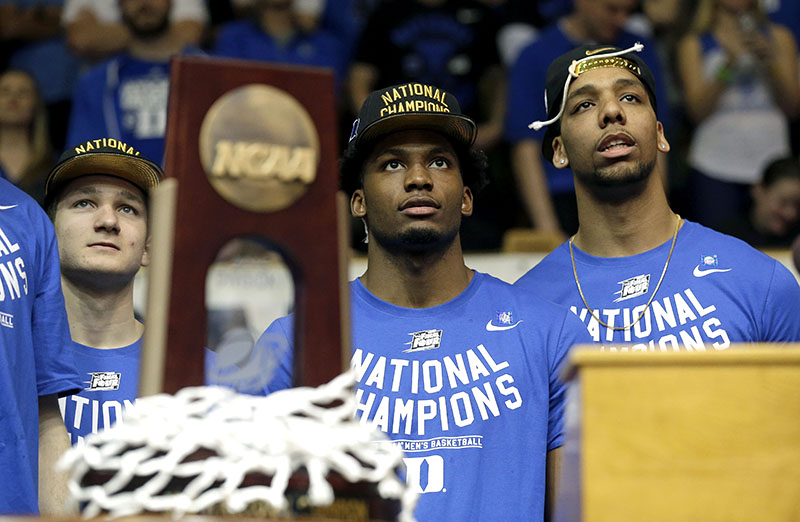 Then the Blue Devils captain said: “I think they’ve got to make some room up there” for another one.

Duke brought its latest national championship trophy back to campus Tuesday, with perhaps 8,000 fans flocking to Cameron for this title celebration.

The Blue Devils earned banner No. 5 by beating Wisconsin 68-63 on Monday night in Indianapolis.

During Tuesday’s 35-minute rally on campus, coach Mike Krzyzewski called this “my favorite year” — a strong statement for a Hall of Famer who just wrapped up his 35th season here.

“My guys have been an absolute joy to coach,” Coach K said.

Cook led the team onto the stage and big man Marshall Plumlee brought out the championship trophy. Krzyzewski said President Barack Obama called him to offer an invitation to the White House.

For Cook, this was the perfect way to go out.

“They’ve made this the greatest year we ever could have imagined,” Cook said. “These guys have made my senior year magical.”

Duke ended the season with eight scholarship players — and half of them were freshmen, though some of them (Jahlil Okafor, Tyus Jones, Justise Winslow) could wind up in the NBA next season.

As a result, the overarching theme of this season was for these Blue Devils to live in the present. They couldn’t worry about the external expectations that come with representing a program that already had four national titles — and those pesky, recent early NCAA Tournament losses to Lehigh and Mercer — in its history.

“What we’ve tried to do all year is enjoy the moment,” Krzyzewski said.

This Duke team started the season at No. 4 in the AP Top 25, never fell out of the top five and won 18 of its last 19 games. At the time, Krzyzewski described the lone defeat in that stretch — an ACC semifinal loss to Notre Dame — as an “out-of-body experience.”

The Blue Devils (35-4) never allowed more than 63 points in six NCAA Tournament victories, capping their run by rallying to beat the Badgers with those four freshmen scoring 60 of the team’s 68 points.

Before the players made their entrance, fans watched a replay of the television broadcast of the game on the arena’s video scoreboard, cheering and jeering at the same places many of them did the night before during a boisterous watch party at Cameron.

During the rally, the scoreboard showed the game’s final score and the clock was frozen on 20:15. It marked the year, yet also was appropriate for a team and a fan base longing to make time stand still, at least for that night.

“Last night was absolutely magical,” Krzyzewski said. “There’s nothing quite like the moment when you know you’ve won the national championship.”