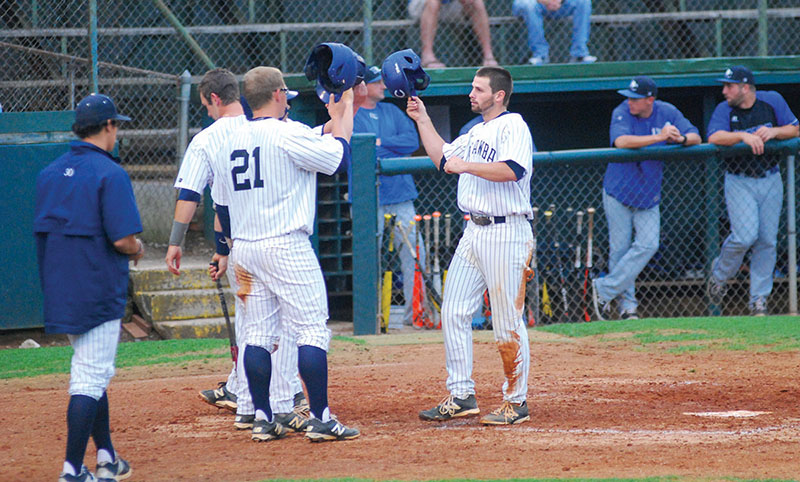 ADAM HOUSTON/THE SALISBURY POST Catawba's Craig Brooks (right) celebrates with teammates T.J. Wharton (21) and Will Albertson (back) on Tuesday after a three-run home run in the bottom of the third inning of a non-conference game against Barton at Newman Park. The Indians defeated Barton 20-2.

SALISBURY — Eight runs in the bottom of the first inning was more than enough Tuesday for Catawba. The Indians, however, kept swinging the bats against Barton en route to a 20-2 victory at Newman Park.

Catcher Will Albertson, the South Atlantic Conference Player of the Week and the Southeast Region Hitter of the Week, singled to left field to drive in the game’s first run. Albertson went into the game leading all Division II players in RBIs.

Kerry Walker, Barton’s starting pitcher, was pulled after only one inning. The Indians tattooed him for eight runs on seven hits.

T.J. Wharton led the Indians’ onslaught at the plate. He was a perfect 4-for-4 with a double and two RBIs.  Smith, Bowden, Albertson, Bryce Fowler and Luke Setzer all had two hits apiece.

Down 10-0 after two innings, Barton got on the board with a solo home run from Nick McKinney.

McKinney and Andrew Webster had a team-high two hits.

Catawba’s bats came to life again in the bottom of the third. T.J. Wharton’s double put runners on second and third with no outs. Craig Brooks then sent a ball over the wall in left field for a 13-1 lead. It was Brooks’ only hit of the game.

Smith and Brooks led the Indians with three RBIs each.

Catawba’s lead moved out to 15-1 after an RBI double by Fowler to right-center field and Setzer’s sacrifice fly to right field that allowed Bowden to score from third.

Russ Weiker was the winning pitcher on Tuesday. The sophomore worked six innings on the mound, giving up only two runs on eight hits. Weiker struck out five.

Catawba, a winner in eight of its last 10 games, is back in action at Newman Park on Wednesday with a non-conference game against UNC Pembroke. The game starts at 6 p.m.