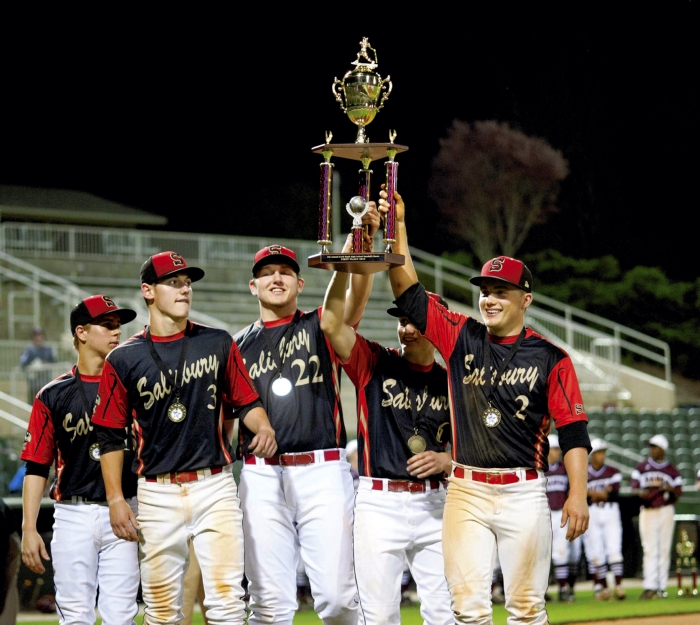 KANNAPOLIS — The display case at Salisbury High School is a little more crowded this morning.

“We strung together the three best hitting days we’ve had since I’ve been at Salisbury,” coach Scott Maddox gushed at CMC-NorthEast Stadium, where SHS earned the victory. “We had double-digit hits just about every game. The best thing is, it was up and down the whole batting order. It wasn’t just two or three guys carrying us.”

Salisbury (9-3) scored 33 runs in three games and bulldozed its way to the title. Paced by the top three batters in its lineup — Will Steinman, Ryan Jones and Riley Myers were a combined 9-for-13 in the final — it leveled everything and everyone in its path.

“We’ve hit good all year, but this was special,” Jones, the winning pitcher, said after going 4-for-4 and reaching base five times. “One person can’t win a championship. We wanted this as a team and we went and got it.”

Salisbury collected 15 hits against four Robinson pitchers. Starter Angel Hernandez didn’t make it out of the third inning and reliever Christian Fisher was tagged for six earned runs in just 1 1/3 innings. Meanwhile, Jones, a senior right-hander, worked his way in and out trouble. He allowed single runs in the first, second, fourth and fifth innings and persevered through six before Maddox pulled him.

“He got the job done,” said Steinman, Salisbury’s junior catcher. “He threw his curve and a lot of fastballs. The fastball was always there when he needed one.”

SHS scored three runs on balks, thanks to some nerve-rattling base-running. It trailed, 2-1, entering the last of the third inning when Steinman whipped a leadoff triple into the left-field corner and scored the tying run when Jones crunched the first of his two doubles. Moments later, Myers (3-for-5 with three runs scored, two RBIs and two stolen bases) grounded a run-scoring single into left. And with two outs, Salisbury’s Harrison Smith made it 4-2 with a sharp, RBI-single up the middle.

There was more clutch hitting in the last of the fourth inning, when Salisbury scored four runs and batted around — all after Fisher retired the first two SHS batters. Balks turned a one-run lead into a 6-3 advantage before Alex Yang paddled a soft, run-scoring hit into left field. Teammate Alex Link then legged out a run-producing infield hit to make it 8-3.

In the fifth inning, Jones and Myers delivered RBI doubles and freshman Chandler Lippard steered a two-run single into left field for a 13-4 edge.

“When one person hits, we all hit,” said Jones, who joined Myers on the all-tournament team. “And once we jumped on them, we didn’t stop. Every time we needed a hit, someone got one.”

It was Myers who submitted the best closing argument. “We just don’t get down,” he said. “When we stay up, we’re as good as anybody. Winning this is awesome, but that was our plan coming in. We expected nothing less.”