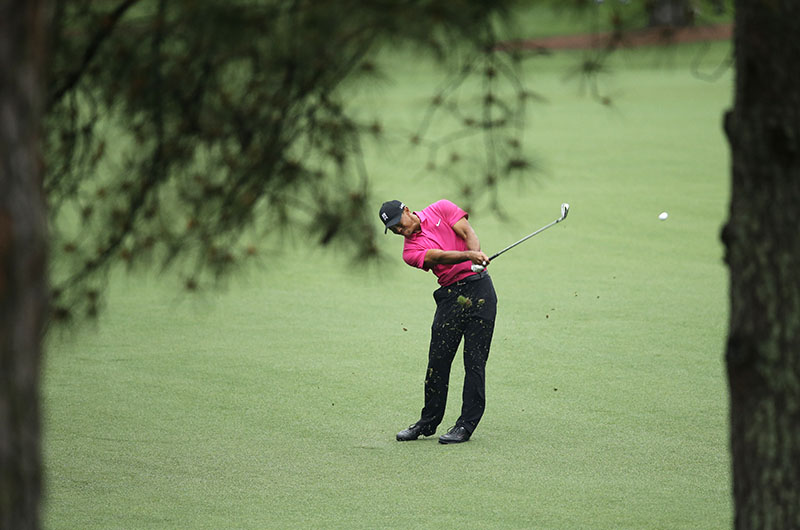 The Associated Press Tiger Woods hits off the seventh fairway during a practice round Tuesday for the Masters. Woods took a long layoff from competition to work on his game after withdrawing from the Farmers Insurance Open in February.

AUGUSTA, Ga. (AP) — Tiger Woods hit the ball so pure that he felt like a 14-time major champion. Before long, the swing left him and he resembled a guy who couldn’t break 80. He became so frustrated that he even threw a few clubs because of a game that had never been so maddening.

This wasn’t Woods playing in the Masters.

This was the last seven weeks when he was trying to decide if he should even show up.

“I worked my (tail) off,” Woods said Tuesday with a smile of satisfaction. “That’s the easiest way to kind of describe it. I worked hard. … People would never understand how much work I put into it to come and do this again. But it was sunup to sundown, whenever I had free time. If the kids were asleep, I’d still be doing it. And then when they were in school, I’d still be doing it.

And he got his answer.

It took nearly two months, followed by two practice rounds at Augusta National last week, before Woods decided to end his self-imposed break and return at the Masters.

Golf’s biggest star always lights up Augusta National, and such was the case when he arrived Monday afternoon.

Only now, expectations have been replaced by sheer curiosity. Never mind that he hasn’t played in nearly two months and hasn’t won the Masters in 10 years. When last seen at a tournament, Woods couldn’t hit a simple chip shot, and the rest of his game was barely PGA Tour quality.

Adam Scott listed a half-dozen players that he could see contend for a green jacket, and he was asked why Woods was not on that short list.

“My guess is as good as yours,” Scott said. “I really don’t know. I have no idea what he’s doing. I’ve listed a bunch of guys that I’ve watched play a little bit and followed their results. But it’s a little bit unknown with Tiger because he hasn’t played for a few months.

“When you’re talking about a world-class player, you just don’t know,” he said. “I’m sure he has high hopes.”

Woods didn’t look anything like the player who shot 82 at the Phoenix Open; who bladed a bunker shot over a green and into the bleachers; who walked off the course at Torrey Pines after 11 holes of the first round. During practice Monday afternoon and Tuesday morning, he looked closer to normal. There appeared to be no issues with his swing or his chipping. He looked comfortable when he hugged his two children on the practice green and in a press room with no empty seats.

Woods always said he didn’t play in a tournament if he didn’t expect to win.

So many others are coming into the Masters in better form.

Rory McIlroy won early in the year at Dubai and began showing progress toward the end of the Florida swing. Jordan Spieth won at Innisbrook, was runner-up at the Texas Open and lost in a playoff at the Houston Open in his last three starts. Bubba Watson is the defending champion and going after his third green jacket in four years.

“I think everyone is just curious to see how he comes back,” McIlroy said.

There was no epiphany on the practice range at home. He worked with his new coach, Chris Como, and never lost hope his game would not return.

But he’s not there yet.

He tees off Thursday afternoon. For all the questions about his game, the score will be the measure of his game, just like always.