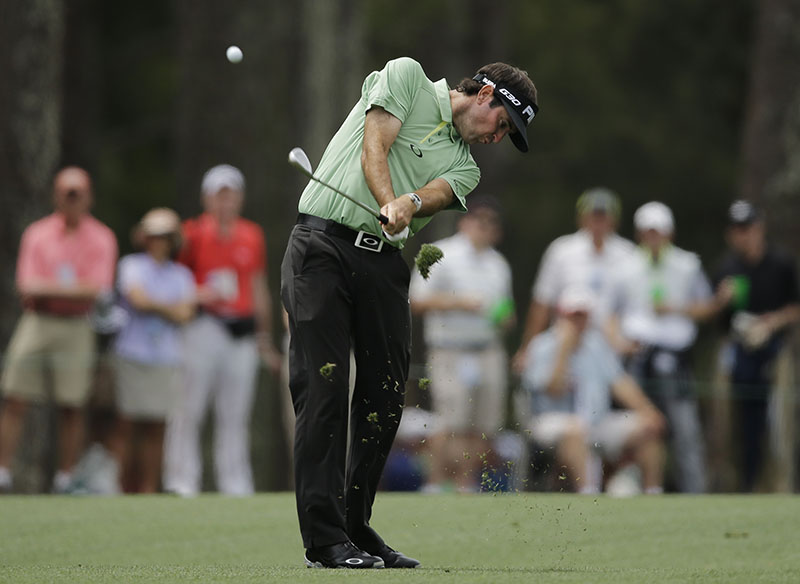 The Associated Press Bubba Watson hits on the 14th hole during a practice round Tuesday for the Masters in Augusta, Ga. Watson, the defending champion, is trying to win his third Masters tournament in four years.

AUGUSTA, Ga. (AP) — Bubba Watson was strolling up to the ninth green, toward the Augusta National clubhouse and that towering oak tree, when he was struck by a fact that still seems a bit unreal.

He’s won the Masters not just once, but twice.

Yet here he is, a champion two of the last three years, now trying to become only the fourth golfer in Masters history to defend his title. It’s a very exclusive club, currently limited to three giants of the game: Jack Nicklaus, Nick Faldo and Tiger Woods.

Somehow, it just doesn’t seem right — not even to Watson — that a good ol’ boy from the Florida Panhandle, who taught himself to swing and approaches the game with an unconventional attitude, could even have a shot at joining such a list.

“The trees outline the fairway pretty good, so it’s easy for me to envision the shot I want to hit,” Watson said.

While his game has never been better, he remains a polarizing figure. That reputation tailed him all the way to the Masters, when ESPN released a survey that showed he’s the least popular player among his fellow PGA Tour competitors.

There’s no lack of respect for his game.

He’s a favorite this week, a popular choice along with Rory McIlroy and rising star Jordan Spieth, someone clearly on the verge of winning his first major title.

“You can imagine what Bubba must feel like,” said Adam Scott, who won in 2013. Augusta National “is seemingly made for his kind of game, and he’s playing nicely as well.”

Watson shrugged off those who would anoint him a favorite. But he conceded that he’s feeling a lot more comfortable defending his title this around, compared to the way it went down two years ago, when he broke par only once and finished in a tie for 50th.

“I didn’t know what to expect,” he said. “I mean, I’m scared to death of the Champions Dinner in ‘13 because you’re talking about great champions across the board, old and young, and now I’m getting to sit and have dinner with them and I’m making sure they like the food I picked out. The media attention, the atmosphere — even a year later — you’re excited about your win. Sometimes you get away from your routine or you just use your energy in a different way. That’s what I did.

Watson would love to win a few more green jackets.

If he doesn’t, there won’t be any complaints.