Gumbo: It’s the flavor of Louisiana 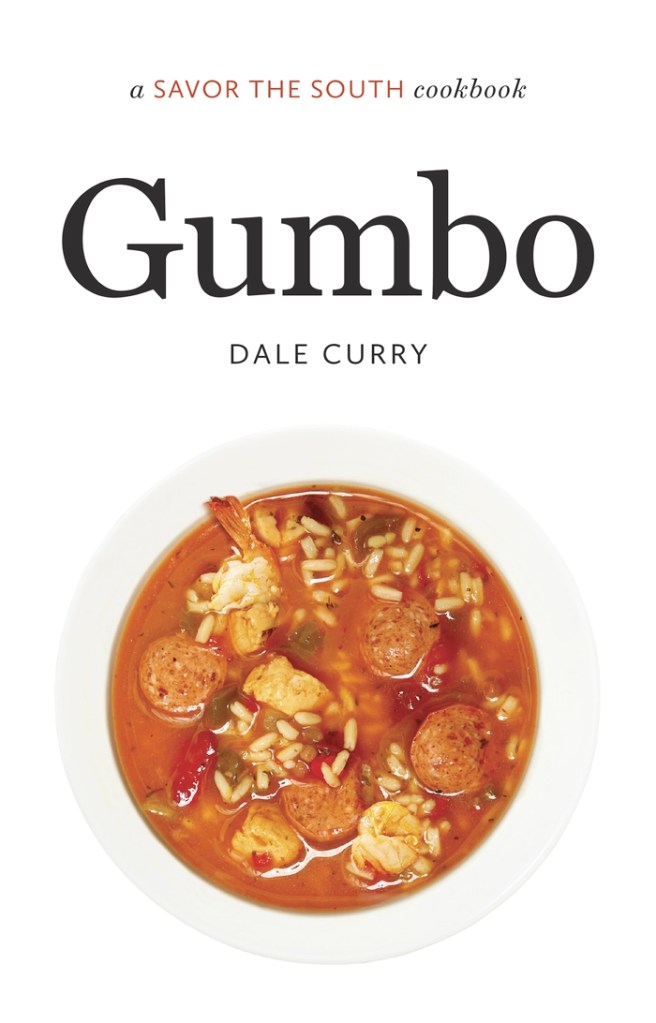 Gumbo' includes recipes for gumbo, of course, as well as jambalaya and lagniappes, something extra, such as dirty rice or Grits and Grillades.

The Savor the South cookbook series continues to grow, with “Gumbo” as the latest release. The other two released this year are “Shrimp,” by Jay Pierce, and “Catfish” by Paul and Angela Knipple. (Salisbury Post March ??

Just a glance at the contents shows you are going to find pretty thorough instructions here, because there’s  recipes for roux, that invaluable flavor base for gumbo, recipes for seafood and poultry stock, rice, Creole seasoning and all manner of gumbo, from shrimp and okra to catfish to cabbage to duck and andouille gumbo.

And then there’s jambalaya, from the very fancy Braised Goose and Foie Gras recipe of  chef Tory McPhail to Pastalaya.

The Lagniappe section, the little something extra, gives recipes for dishes such as Corn and Shrimp Soup, Crab and Brie Soup, Crawfish Pies, Dirty Rice and much more, including Turtle Soup.

It’s a seafood lover’s dream. You can also learn what the heck a mirliton is and what to do with it.

Recalling childhood visits to her grandmother’s house in New Orleans, where she would feast on shrimp and okra gumbo, author Dale Curry offers 50 recipes that will put Louisiana taste and hospitality on your table.

“Gumbo” calls to mind the diverse culinary traditions of Louisiana that, like gumbo itself, are simmered from elements of the many cultures circulating in the state.

Drawing historically from French, African, Caribbean, Native American, Spanish, Italian and other culinary sources, the Creole and Cajun cooking featured in the book embraces the best of local shellfish, sausages, poultry and game.

Curry explains how French and Canadian settlers arrived in the 1700s, followed by ships carrying slaves. Then Germans settled upriver. And within 40 years, the Spanish controlled the colony. Meantime, the cooking styles began to merge, along with that of the Native Americans. The Germans provided meat and French bread, with some of their bakeries surviving even now.  In the 1800s, Italian came to the area, creating the unique cuisine that we now know as Louisiana style.

Curry writes lovingly of how the atmosphere changes as you drive down I-10 and begin to smell the swamps and see the moss-draped trees. She says everyone who visits her, and she has lots of friends, expects a bowl of gumbo rich with crabs, shrimp and oysters as soon as they arrive.

The heart of Louisiana home cooking, now showcased on the menus of chefs across the South and beyond, traditionally drew from the state’s waterways and estuaries rich with crustaceans, swamps exploding with waterfowl and alligators, and forests full of game. From the land came rice and peppers, two leading ingredients in gumbo and jambalaya.

Recipes include classic and traditional dishes, as well as specialties offered by star chefs Bart Bell, Leah Chase, Emeril Lagasse, Donald Link and McPhail. With Curry’s easy-to-follow instructions at hand, home cooks will be ready to let the good times roll at every meal.

Curry, who was the New Orleans Times-Picayune food editor for 20 years, is the author of “New Orleans Home Cooking.” She now writes about food for New Orleans Magazine.

Creoles and Cajuns have long survived on this basic gumbo, and there is none better. The ingredients are pure Louisiana. Use fresh okra and shrimp if available, but frozen will run a close second. The only accompaniments needed are rice and French bread.

If using fresh shrimp, de-head, peel, and devein them, placing the shells and heads in a medium pot. Add enough water to cover the shells by at least 2 inches and bring to a boil. Cover, reduce the heat to low, and simmer for 30 minutes. When slightly cooled, strain the stock into a large measuring cup and discard the shells.

If using fresh okra, heat 1 tablespoon of the oil in a medium-to-large skillet. Over medium heat, cook the okra, stirring occasionally, until the stringy liquid disappears. Set aside.

Heat the remaining oil in a large, heavy pot over high heat. Add the flour and stir constantly until the roux begins to brown. Reduce the heat to medium and cook, stirring constantly, until the roux is the color of milk chocolate. Add the onions and the white parts of the green onions and cook, stirring, until the onions begin to caramelize. Add the bell pepper and celery and cook until wilted. Add the garlic and cook a minute more.

Add the tomatoes and gradually stir in the stock or water. Add all the seasonings except the parsley, reduce the heat to low, cover, and simmer for 30 minutes. Add the shrimp and simmer until the shrimp turn pink, about 10 minutes. Remove from heat and add green onion tops and parsley and remove the bay leaves.

Serve in bowls over hot rice with hot French bread.

Using a plump hen is a favorite way to make gumbo in the Cajun Country of southwest Louisiana. A fatty hen gives more flavor, and it is easy enough to skim the fat from the surface as the gumbo cooks. Cajuns generally serve the dish with whole pieces of the hen, but the meat can be taken off the bones after cooking, if preferred. Hens are tougher than chickens and must cook longer.

Cut the hen into pieces as you would cut a chicken. Because the breast is large, cut it into 3 pieces. Use the back bone and any giblets, except the liver. Rinse, dry, and sprinkle liberally on all sides with salt and peppers.

Using a very large, heavy pot, heat 1//4 cup of the oil and brown the hen well on all sides. Remove the hen from the pot and set aside.

Add the remaining oil and the flour to the pot and stir constantly over high heat until the roux turns light brown. Reduce the heat to medium and cook, stirring constantly, until the roux is dark brown (the color of milk chocolate or a little darker).

Reduce the heat to low; add the onions, the white parts of the green onions, the bell pepper, the celery, and the garlic and sauté until translucent. Gradually stir in the stock and/or water. Return the hen to the pot. Add the bay leaves and season with Creole seasoning, cover, and simmer for 3 hours, stirring occasionally. As the gumbo cooks, skim the fat from the surface. You may skim as much as 1 cup of fat.

When the gumbo is cooked and the hen is tender, remove the bay leaves and stir in the green onion tops and parsley. Serve in bowls over the rice.