My Turn, Donald Tracy: On Iran, Hillary and immigration 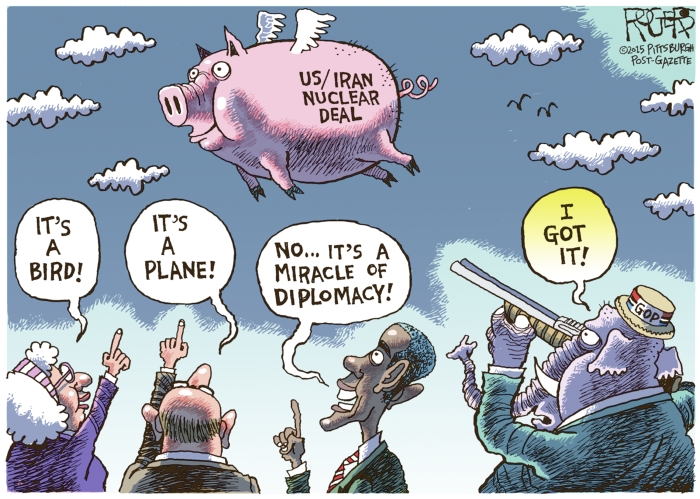 It is unfair to write about the problems of immigration as if they are problems created by President Obama. We can’t act as though the Congress has no part in creating or fixing the problems.

Congress wanted the border sealed. Good plan. But when it came time to pay for the wall, there wasn’t enough money. It seems the good ol’ boys thought it was more important to give more tax breaks to the wealthy. Well, we can always blame President Obama, and Fox News will lead the charge.

There is deportation, of course. Again, it would cost a whole wad of money. The president set priorities and sent back as many as financially possible.  Baddies were the first to go, and he deported more people than all presidents from Reagan until 2008.

What do you suggest? Line up all 12 million immigrants here illegally and play the Trail of Tears routine again? That would make the world aware of the exceptionality of some of the citizens of this country. Are some of you proud that the increased border patrol has increased the number of drownings in the Rio Grande?

There must be a solution. It must be humane.  Finger pointing and complaining will not get the job done.

On Iran and the bomb:

Does anyone in the Republican Party have even a clue how to solve the Middle East problems without another expensive war in money and body count?  If you don’t want to pay for it and put on your uniform, you are not helping, just whining. That is almost as bad as the back-stabbing of the 47 Republicans who warned Iran in a letter that whatever it negotiated with President Obama could be undone in two years.

This is a funny one if there ever was one.  After seven very expensive investigations about Benghazi that proved nothing, while watching Hillary use her cell phone, some genius finally decided she must have records from her calls. I don’t have a total bill on all investigations, but it was reported that one committee spent 15 million of our tax dollars.

When the GOP found that the Clintons have a private server, they were concerned that it may not be secure. Like a bunch of idiots, they announced to every hacker on the planet where they might go hacking. Is there anyone who wonders why the server has been cleaned? The committees have thousands of pages of records that were turned over to them. Have they read any of that material?   Maybe we should require an exam on all those materials — a 20-page exam on the April 15 to see if they read anything.