‘Illusions’ at Discovery Place: How did they do that? 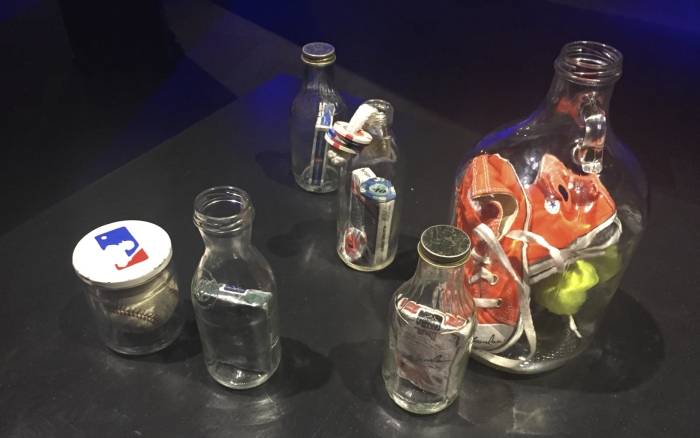 Bottle Magic is part of the Illusions exhibit that continues until May 10 at Discovery Place in Charlotte. How did those orange sneakers get into that bottle? (Submitted photo)

CHARLOTTE — My son and I recently had a wonderful day at Discovery Place … or did we?

In the museum’s latest exhibit, “Illusion,” nothing is as it seems. From the Science Gallery at Trinity College Dublin, the exhibit explores the science behind optical illusions — and even audio illusions — to prove that reality can be extremely different from perception.

The exhibit continues until May 10 at Discovery Place, 301 N. Tryon St.

Andrew is a senior in high school, and we were both fascinated with the exhibit. Kaitlin Rogers, the museum’s public relations and marketing director, says the show has found a wide audience. It’s the first East Coast stop of the international show.

The museum has a program for adults 21 and up called “Science on the Rocks,” which takes place the third Friday of each month. In February, the evening was centered around the theme “Smoke and Mirrors.” Some 2,400 people attended, the most ever for this event, Rogers says.

“People seem to be spending a lot of time with the exhibit,” Rogers says. The museum hasn’t forgotten its younger visitors. The addition of invisible ink signage viewed via tiny flashlights has been a huge hit with the younger set, she says.

At the media preview, Rogers invited moms and their young children, and the parents all gave it rave reviews.

We ran into Jesse Harwood and Bonnie Robinson, and their four kids, 20-month-old triplets and 3-year-old son. Jesse admits that the family simply “cruised through” the exhibit but still found it intriguing.

“We have fun every time we go there,” he says.

As a local tie-in, the museum has added pieces by Leonor Demori Neisler, a Charlotte artist who combines traditional painting methods and chemistry to produce interesting, multi-layered artwork.

The exhibit’s 20 separate installations invite visitors to look, listen and linger — and try to figure out just what the heck is actually going on. At the opening display, you can make out cross-sections of what looks like a head, and when you look at it straight on, it seems just that, in one solid piece.

Those who enjoy optical illusions will be well satisfied with the exhibit. There are strobe lights and moving patterns that will make you question exactly what you’re seeing.

The exhibit Andrew spent the most time with is called “Significant Birds.” It was actually an audio-based display, with multiple birdcages containing small speakers spaced several feet apart. It sounds like you’re listening to chirping birds, but they’re actually recordings of the human voice. Andrew loves linguistics, but I don’t think he ever heard anything more than chirping sounds.

Another display I could simply not figure out was a set of oil cans — with drops of water that seemed to flow up into them, not downward from them. It was called “Supermajor.”

Andrew tried his best to explain it to me … But I still don’t get it.

Another display, “Typrographic Organism,” seemed to have digital letters flowing into a glass bottle. As someone who loves letters and works with them daily, I loved it. Still another, “Titre Variable No. 9,” projected a tiny man walking the border of a real record playing backward on a turntable. And how’d they get those orange high tops in the glass jug in the “Bottle Magic” piece?

You may not be able to explain what you’re seeing — or what you think you’re seeing — but it’s a great way to spend time with your family and learn some cool science, too.

The film is by National Geographic Entertainment, so we knew it would be top-notch, and it was. It explores things that are too fast or too slow or too small to be seen by the naked eye — as well as invisible light waves. The film is made possible through the use of high-speed and time-lapse photography, electron microscopy and nanotechnology.

The tiny flea is colorful and majestic, while the mites on your skin appear monstrous. Although “Seeing is Believing” is the film’s tagline, sometimes what you don’t see is a good thing.

For more information about “Illusions” or IMAX films, visit www.discoveryplace.org or call 704-372-6261.