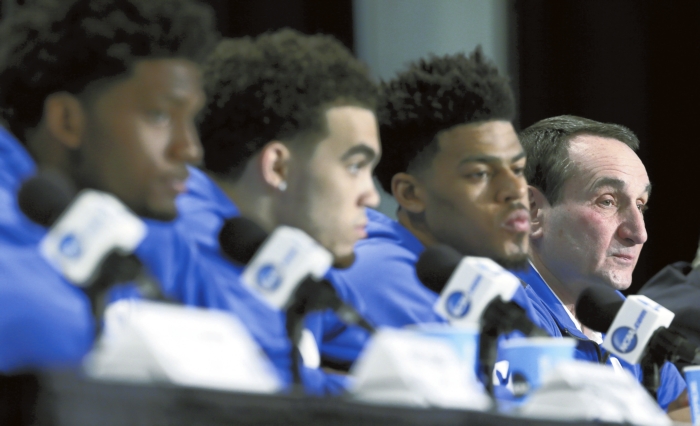 INDIANAPOLIS (AP) — Amid all the wins and championships for Duke under Mike Krzyzewski, defense was always a constant: Blue Devils chasing ballhandlers, harassing them into mistakes and pressuring them farther and farther from the basket.

The Blue Devils needed some tweaks this time around. The young group didn’t always play with the kind of lockdown intensity as its predecessors. And there were a couple of notably porous midyear showings that begged the question of whether this year’s Blue Devils defended well enough to win Coach K’s fifth national championship.

Yet here they are, in another NCAA final, and the defense is playing its best ahead of Monday’s matchup with a Wisconsin team that can score at an efficient clip.

“This group has found an identity defensively,” assistant coach Jon Scheyer said. “I don’t know in the beginning of the year if we had such a hunger to stop people or loved it as much. I think now, we love stopping people and playing defense, and that’s something you can really see with this team.”

Duke (34-4) has held its five NCAA Tournament opponents to 55 points per game on 37-percent shooting. The 55-point average is the lowest for the program in the NCAA Tournament going back to at least 2000, while the shooting percentage is the third-lowest allowed in that span, according to STATS.

By comparison, the 2010 team that won the program’s last national title here in Indianapolis allowed nearly two points more per game and 38 percent shooting in the tournament.

Duke’s struggles stopping dribble penetration ultimately led Krzyzewski to sprinkle in some zone defense — almost unheard of during his 35-year tenure with the Blue Devils. But over time, senior Quinn Cook has become a tough on-ball defender, while the rest of the team improved with experience and better oncourt communication to form a cohesive tournament unit.

The defense will be tested by the Badgers (36-3), a fellow No. 1 seed averaging 79 points and 49 percent shooting in the NCAAs.

“Well, when they’re locked in, they’re really good,” Wisconsin associate head coach Greg Gard said. “I know they’ve changed some things, they’ve played some more zone than typical and they’ve tinkered with that through the year, but their man-to-man has gotten better, too. That’s just through experience.”

It sure feels like the Blue Devils are a long way from the team that let North Carolina State and Miami do anything they wanted in double-digit losses in January.

The Wolfpack and Hurricanes combined to shoot 53 percent, make 20 of 36 3-pointers and score 177 points. The Miami loss was particularly humbling.

Point guard Angel Rodriguez repeatedly blew by defenders and into the paint as the Hurricanes scored 56 points on 18-for-27 shooting after halftime — a performance so dominant that Duke fans fled for the exits of the program’s famously hostile Cameron Indoor Stadium with more than a minute left in the 90-74 loss.

By the NCAAs, though, Duke wasn’t letting teams in the South Region crack 60 points on the way to Krzyzewski’s 12th Final Four. Then the Blue Devils locked down on Michigan State in Saturday’s national semifinals, holding them to 40-percent shooting in the 81-61 win.

That included holding the Spartans to 3-for-20 shooting over the last 16-plus minutes before halftime, with Duke mixing in some zone with its man defense in a dominating performance.

“When you have a veteran team where guys have been in your program for three and four years, you can teach the defense better,” Krzyzewski said. “Then also the older guys can help teach the younger guys. When we have a young group like that, you’re only going to get to a certain level of playing team man-to-man defense. So you have to do some other things and do more variations within the man-to-man defense. “These guys have learned at a quicker rate, though, than I would have expected from a young team. We’ve been outstanding on the defensive end, primarily in the man-to-man, but with some modifications.”

Krzyzewski, the winningest coach in men’s Division I history with 1,017 victories, has shrugged off questions about his team’s defense by saying the Blue Devils wouldn’t have won this many games if they were really a bad defensive team. As of now, there’s no reason to argue.

“Obviously we knew we needed to get better,” sophomore starter Matt Jones said. “But throughout the tournament, we feel like we’ve honed on the defensive end and we’ve ramped it up a little bit. We feel that we’ve been the best defensive team in this tournament as of late.”