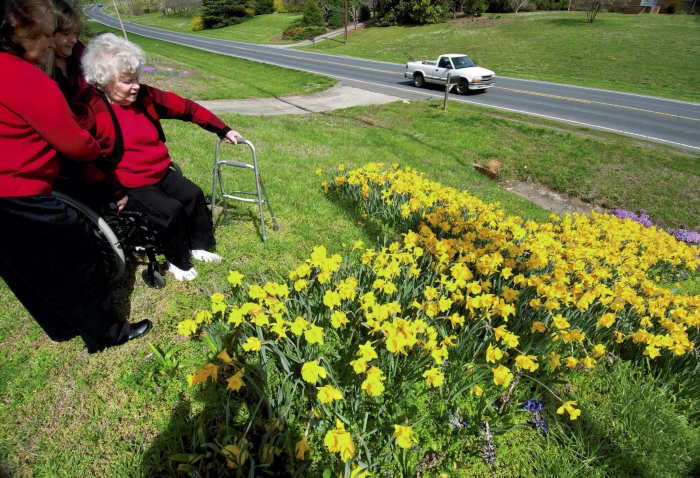 JON C. LAKEY / SALISBURY POST Ruby Goodman has been planting daffodils and crocus bulbs on the steep slope in front of her home on Bringle Ferry Road every year for her Easter cross that has been stopping traffic for years. Since last season, Goodman has suffered a stroke that has greatly restricted her mobility. Family and neighbors joined in to help make sure that the cross returned for this season. On Saturday Goodman , with the help of her daughter Ouida Davis and personal nurse Melissa Morgan, got a chance to see the cross up close as she stood from her wheelchair with the aid of a walker and looked over the Easter symbol.

Since 1977, Ruby Goodman has faithfully planted daffodil bulbs each fall that bloom into a dazzling cross right before Easter.

But Ruby had a stroke on Sept. 17. She’d already ordered the bulbs from Terra Ceia Farms in Pantego, N.C., but sadly was in no shape to plant them.

Since Ruby couldn’t go pick up the bulbs like she usually does, the company shipped them to Salisbury, free of charge.

Ouida and Elbert, along with neighbors Teenie and Tommy Waller and Teenie’s sister Shirley Griffin, planted the 1,000 daffodil bulbs with 240 blue hyacinth bulbs for the border.

Last fall, they felt a bit like mountain goats as they clung to the steep hillside on Bringle Ferry Road, Ouida says, but they got the job done — to its usual brilliant results.

A couple of weeks ago, the cross sprang to life, right on time.

As they always do every year, folks have stopped to take pictures, Ouida says. “On Sunday afternoon, I thought we were gonna have a traffic jam.”

The cross blooms depending on the weather, Ruby says, usually the end of March or first of April. Somehow, it always seems to appear just in time for Easter.

“So many people depend on seeing the cross,” Ruby says.

“It’s just something we look forward to every year,” says Margie Hartley, who lives nearby with husband Jimmie. “It’s just very special.”

Margie is herself a lover of flowers. “My yard is full of jonquils. I love them. It’s always a joy to see Ruby’s cross. It makes my Easter.”

Ruby and Ouida love and appreciate all the positive comments they’ve received. One woman stuck a note in Ruby’s mailbox, saying she wanted her to know how much a simple patch of flowers meant to her.

“I hope everybody learns about Jesus,” Ruby says.

“This has been a hard journey,” Ouida says. “I needed those positive comments so much.”

After Ruby was released from the hospital, she has been recovering in a small house next door, originally built to house all her many craft items. Many women remember Ruby from when she ran her dress shop in Downtown Salisbury. Throughout the 1980s, it was the place to buy your prom gown.

Over the years, Ruby has had many hobbies and collected dolls, tea sets, ceramics and the like, so this house is a place for her many collections.

At first, Ruby says she’s a collector, but then admits to being a packrat, too. A lot of her collection had to be stored when she moved in.

“I built it like a house so when I passed on, someone could use it,” she says. “I didn’t know I was gonna use it! This is so open, and good for what I needed.”

Ruby is number six and Elbert number nine in a family of 11 children. The eldest is deceased, but four others live in town, the rest spread out among the Carolinas and Virginia.

Ruby says that walking with her brother is hard work.

“But I’m determined,” she says. “I want to get my balance back so I can walk alone.”

In February, she told Elbert she’d be walking on her own by April.

When the state widened Bringle Ferry years ago, Ruby was left with a “scooped-out” front yard that was deeper than before.

“I thought, what in the world am I gonna put on that hill?” she says. Because she’s always loved flowers, and because she planted a cross in her yard as a youngster, she decided a cross would be just the thing.

It was a good choice.

An earlier frost hit some of the flowers in the flat part of Ruby’s yard, but the enormous daffodils in the cross still continue to glow, planted full and tight.

“That cross is protected,” Ouida says. “Mom plants it, and God lets it grow.”