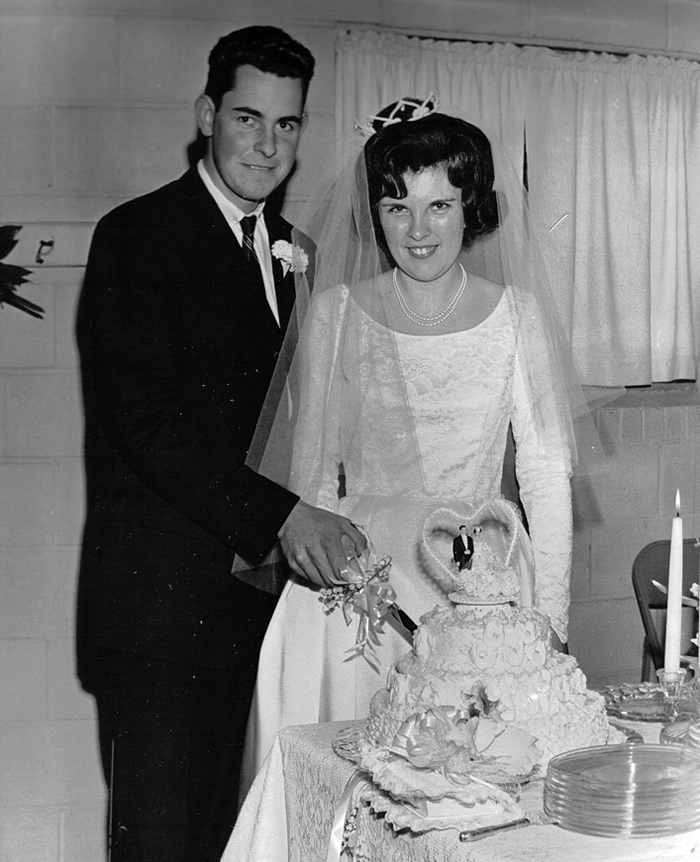 Robert L. Frye (Pete) and Gail Carter Frye of Mocksville celebrated their 50th Anniversary on Sunday, March 8, 2015, at the Rowan Museum’s Messinger Room. More than 150 friends stopped by to celebrate the occasion and enjoyed music by Mona Jo Griffin and Friends.
Pete and Gail were married on March 6, 1965, at Franklin Presbyterian Church in Salisbury by Rev. Finley M. Grissett and made their home in Mocksville shortly after. The couple has three daughters, Angela Wood Hendren (Justin) and Robin Frye McCarson (Shannon) of Advance and Melinda Frye Phillips (Eric) of Mocksville. They have 10 grandchildren: Jacob, Joshua and Elijah Wood; Caleb, Joshua and Hope Hendren; Alex Frye and Kaleb McCarson; and Aspen and Charleigh Phillips.
Pete worked as a mechanic and electrician for most of his career. Gail was a homemaker while her girls were in school and then worked for Ingersoll-Rand of Mocksville for nearly 20 years.
Since retirement, Pete enjoys spending time in his garden, and Gail is known for her famous pound cakes and her love of travel. They also enjoy caring for two special boys, Kaden Young and Jensen Foster. Both boys love helping in the garden and baking cakes.
The event was hosted by their daughters, Angelia, Robin and Melinda, as well as Janie Coe and Ellen Bishop, Pete’s sisters.