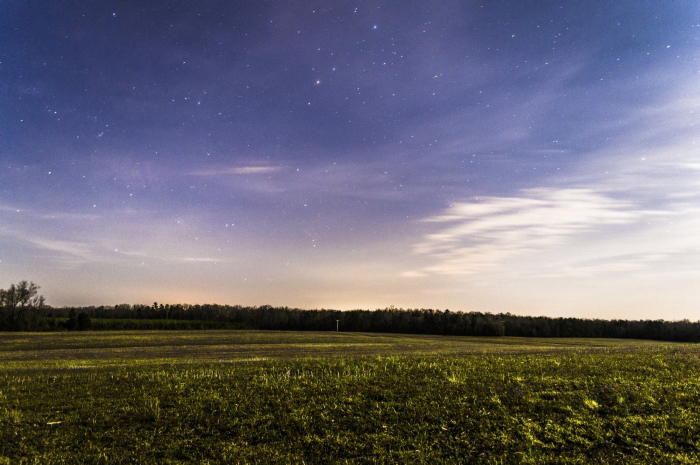 A smattering of stars dot the night sky over a field in Rowan County near Tuckertown Reservoir. Light pollution from a nearby municipality forms a bright spot near the horizon. Josh Bergeron/Salisbury Post

Rowan County’s trajectory for business and residential development is a steep incline if you talk to just about any public official, but there’s a trade-off with growth.

Growing Rowan County’s economy was, by far, the most frequently mentioned topic during the campaign for county commissioner. It’s certainly mentioned as a goal at every level of public authority. Adding to the population base in Rowan County unquestionably means more physical structures in Salisbury and surrounding municipalities. New subdivisions outside of a municipality are also likely to spring up. The disappointing trade-off with growth is an increase in ambient light, also known as light pollution. It’s a glow that surrounds cities and seeps into the less-populated, surrounding areas.

Sure, economic growth boosts the quality of life both directly and indirectly. With more retail outlets, Rowan residents are able to travel shorter distances to fulfill shopping urges. Industrial and business expansion, likewise, means more jobs are closer to where Rowan residents live. Both kinds of growth mean increased tax revenue for county and municipal government, which can, in turn, add to available services.

The most visible effect of increased ambient lighting is a fall off in the number of stars that can be seen by the human eye. Currently, stargazers in Salisbury’s city limits still can see a few specks of light dotting the night sky. Conditions get better further from municipalities, but no location in Rowan County, and certainly no spot in North Carolina, is perfect.

Perhaps the mountains offer better conditions. Even then, ambient light from Chattanooga, Asheville, Knoxville and other urban areas drown out some of the night sky. Dare County is the only one in North Carolina with broad stretches of land that show little light pollution on maps. Western states, by far, have the best night sky views.

Realistically, there’s no way to ensure light polllution doesn’t drown out all of the stars smattering the night sky. The expansive metropolitan area surrounding Charlotte, in large part, will prevent Rowan County from ever having a full sky of stars. The Piedmont Triad — Winston-Salem, Greensboro and High Point — likewise has an effect on our night sky.

But Rowan County isn’t entirely out of luck.

In the southeast corner of Rowan — near the border of Davidson and Stanly counties —the viewing conditions are good enough to catch an eyeful of stars in every direction. A well-trained photographer or astronomer can even spot a bit of the Milky Way on a clear night.

The quality of night sky may be a secondary or tertiary concern as Rowan’s leaders look to boost the local population through economic development, but it’s one that should be considered. Animals and humans have used the sky for centuries to determine ordinal directions. A summer night on a back porch is hardly complete without looking up to catch a glimpse of the stars.

Natural beauty is a part of the quality of life, too. Rowan’s growth may be inevitable, but it’s certainly possible to add business and industry while leaving portions of the night sky undisturbed.

Josh Bergeron is a reporter for the Salisbury Post.