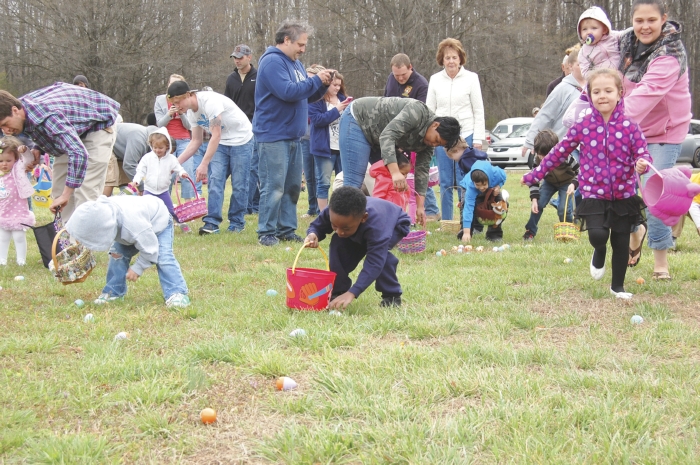 A young boy picks up an egg during the Easter egg hunt at Dan Nicholas Park Saturday. Hundreds of children attended the annual event.

It only lasts for a minute or two, but the Easter egg hunt at Dan Nicholas Park has enough excitement for a whole day.

Hundreds of children, along with their parents and other family members, came out Saturday morning in the breezy, cloudy, and a little bit chilly, weather for the annual egg hunt.

Thousands of plastic eggs and pieces of candy were spread across the open field near the parks entrance. The area was roped off until a few minutes before the hunt started. A line of people stretched for hundreds of feet along the other side of the rope from where eggs had been spread by park staff earlier in the morning.

At a table under a tree, people guessed how many candy eggs were inside a class jar. Khloe York, 5, and her mother, Nikki, estimated there were 62 eggs in the jar. It was Khloe’s first time at the egg hunt at Dan Nicholas Park.

By the rope line, 4-year-old Hayley Palmore was holding a pink basket and patiently waiting for the egg hunt to start. A boy, with a bucket over his head, was spinning round and round nearby.

Hayley was with her mother, Stephanie, and father, Nicholas. This, too, was Hayley’s first time at the park’s egg hunt, her mother said, adding they normally do one at their church on Easter Sunday.

Farther down the line, Brody Clontz was preparing for his third egg hunt at Dan Nicholas. He was with his grandmother, Kathy Martin, her other grandson Hudson Chiu and Hudson’s mother, Sarah.

Brody, 4, couldn’t remember how many eggs he got last year, but said he is going to get a bunch this time around.

Children were divided into groups, one for kids up to age 5 and another for 6 to 10 year olds. The younger children went first.

The Easter Bunny arrived on a firetruck shortly before the egg hunt. Children and families posed for pictures with the furry friend later on.

A couple of minutes before the start of the hunt, Andrea Baucom, the park’s events coordinator, used a megaphone to give a few instructions.

A chorus of screams and yells erupted from the crowd. Children ran toward the eggs — 30 feet away. Some kids were helped by their parents, others were on their own. Chaos ruled the moment as the multicolored eggs were snatched, grabbed and scooped by tiny hands and dropped into baskets of all shapes, colors and sizes.

The craziness didn’t last long. Soon children were spread out, sitting on the grass counting their harvest. Some eggs had prize tickets inside, which youngsters could exchange for a small, stuffed animal.

Under a tree by the parking lot, Zoey Tingler and her brother, Josh, counted eggs with their mother, Ashley.

How many eggs did Josh get?

Zoey proudly held up her basket to display her winnings.

Over by the area for the older kids’ egg hunt, Brody, his hood halfway over his head, was counting his eggs with Hudson. They watched the madness ensue as the bigger kids scrambled for their share of eggs.

After it was over, people went to stand in line for pictures with the Easter Bunny or in another line to redeem their prize tickets.

Baucom, who has been a part of the Easter Egg hunts for 26 years, walked across the field, now void of any sign of the small, plastic eggs.

A night out at the mall