Dot Jackson: A woman who knows how to tell a story 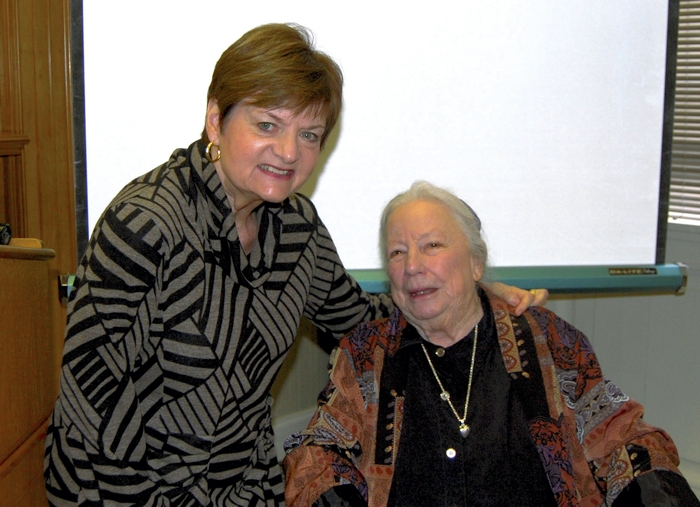 Deirdre Parker Smith/Salisbury Post Dot Jackson, right, worked with Dick Banks at the Charlotte Observer. Banks was the father of Margaret Basinger, a member of Friends of Rowan Public Library.

Dot Jackson has written but one book in her life, and what a book it is. “Refuge” is the story of Dot’s relatives who created a scandal in their day.

It’s a fascinating story of cousins falling in love, of the refuge of a mountain home and in each other.

But Dot has been a storyteller all her life. Even introducing herself, she tells a story. “I was born to Appalachian parents in Miami. I don’t brag that around too much.”

She went on to have a career with words as a newspaper reporter who worked at the Charlotte Observer long enough to cover murder trials, snake handling prayer meetings and the environment. Her work was nominated for a Pulitzer prize several times.

“I’m not what I would call a writer,” she said to people gathered at the recent Rowan Reading Rendezvous. “A writer,” she said, her voice rising, “has big glasses like this, and she looks down her nose at her manicured nails while her housekeeper brings her tea. She says, ‘I write stories in the morning, then in the afternoon, I work on my 500th novel.’ ” Dot laughs with her audience.

“I wouldn’t have written a story at all if I hadn’t heard family secrets.”

The scandalous cousins were 17 and 19 when they met. The mother of one was a young woman who’d married an old Confederate soldier in his 70s. The girl met the boy, whose family had been exiled to Mobile, Ala., for a breach of propriety. The boy’s father had married a woman from there, Liza, who showed her ankles at the family home while holding a book upside down, showing, for one thing, that she could not read. The 17- and 19-year-old naturally were infatuated and ran away together.

Dot’s mother forbade her to tell it, even 70 years later, saying “People won’t have anything to do with us if they find that out.”

“That’s the skeleton on which the book was written,” Dot said. She changed ages, locations, but “those bones let the story come.”

Dot’s family goes way back in Pickens, S.C., at least to 1794 and likely further, and they loved the place profoundly. “I don’t know why. We’ve got poison ivy and ticks and all manner of plagues, but we do love it.”

Dot now lives there, where she started and runs the Birchwood Center for Arts and Folklife. Her writing now is for grants, mostly, and press releases.

Dot’s father was orphaned, and he ended up as a sharecropper on Dot’s grandmother’s farm. He courted Dot’s mother, but since he had no land or money, he was not acceptable. They ran away once shots were fired.

“I was 54 when the last of the elders was gone and I decided I could go home.” She was there one week when an older cousin met her. “Well,” she said to Dot. “I hear you’re back. If your father weren’t trash, you could have been raised here and amounted to something.”

Another cousin, when she asked about the infamous runaways, replied, “Oh, they went to Chattanoogie.”

Dot was of the opinion she had no need to make up junk. “I want to read something that really happened.”

That probably came from her 45 years in the newspaper business. She laments, “It’s all about money now. It’s hard for someone who grew up in the truth-telling tradition not to tell the whole story now. … You get in trouble for telling it all now.”

It took Dot 15 years to write “Refuge.” It was hard to make things up and create the bridges between the real incidents.

It was harder yet for New York editors to know what to make of the manuscript. Her agent sent the book all over and got responses such as, “Hillbillies are not to my taste.” They could not imagine Southerners could be so complicated and complex.

After a while, Dot put the manuscript under her bed. “I was tired of it being insulted.”

A literary professor friend found out where it was and demanded Dot turn it over to him. He took it, then weeks, months and years went by. “He kept it in his refrigerator!” Dot said. He simply wanted to preserve it.

Another young man who had sort of read over her shoulder as she wrote asked for the manuscript — the only existing copy — and it was finally published in 2006. When that press went under, the remaining books were almost destroyed, but Dot’s daughter bought all the books that were left, so Dot still has some to sell.

She’s concerned with the state of the literary world now. “Everything is geared around electronics,” she said. “People don’t talk to each other anymore. You’ve got to set on the porch and listen to the old ladies tell stories.”

Everything is so impersonal. She’s very distressed by the state of discussion and literature. “When something like ‘Fifty Shades of Grey’ is on the bestseller list, what are we going to do?”

Dot said she’s now too old for any writing beyond grants and press releases. “I don’t have the attention span anymore.”

But she does have one book to recommend: “The 100-Year-Old Man Who Climbed Out the Window and Disappeared,” by Jonas Jonasson. The book sounds a lot like the life Dot would like to lead.