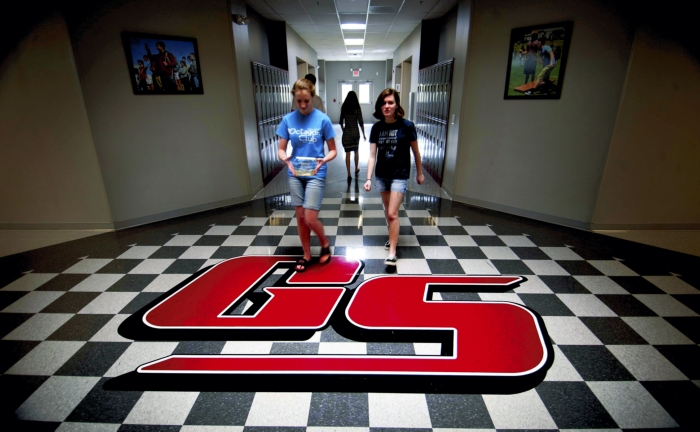 Gray Stone Day School students Abby Kluttz and Hunter Nichols come back from a nearby creek with a water sample for their science class. Gray Stone located beside the Pfeiffer University campus was established 2002 and draws students from several surrounding counties. JON C. LAKEY / SALISBURY POST

Charter schools are rapidly growing in popularity, and although Rowan County isn’t currently home to one, the debate between traditional public schools and charter schools hasn’t failed to touch local families.

Charter schools are a publically funded alternative to traditional public schools, and offer more flexibility in structure and curriculum.

With Gray Stone Day School located on Pfeiffer University’s campus in Misenheimer and dozens of others in Concord, Charlotte and Mooresville, charter schools aren’t a completely foreign option to Rowan County parents and students.

As a teacher in a traditional public school, Linda Bryant never dreamed she’d send either of her two sons anywhere else.

Her older son graduated from East Rowan High School in 2008 and thrived during his time there. Her younger son, however, was bullied throughout middle school. When it came time to register Wyatt for high school, Bryant realized they needed to look at different options for him.

“Not all children are the same,” she said, adding that they were concerned that he would be “swallowed up” at a traditional public high school.

“He has done really well,” Bryant said. “I feel like I’m getting a private school education with a public school price tag on it.”

“Gray Stone is probably not a good fit for every kid,” she added. “The standard is just a little higher.”

Gray Stone’s mission is to prepare its students for college and to form them into the most competitive applicant possible. Charter schools see a need and form the school in a way that meets that need, she explained.

“When my children left to go to competitive schools, they were not prepared to compete with students coming from Boston, Atlanta or Charlotte,” said Gray Stone Chief Administrative Officer Helen Nance.

That’s when the idea for Gray Stone was born.

Nance drew up a charter application, formed a board of directors and applied for a charter. The application was granted and Gray Stone Day School opened its doors in the fall of 2002.

The school has “high expectations for students, encouraging them to perform at the highest level they can,” she said.

Even with such high academic standards, Gray Stone, like all charter schools, is open to any North Carolina resident, regardless of academic standing.

“We share the information up front that it is a college prep curriculum. Anyone can come, they just have to be willing to work really hard,” Nance said.

While charter schools are held to the same academic standards as any other public school in North Carolina, they are given freedom in class offerings and structure.

“We still have to meet the testing standards that come from the state,” said Gray Stone Associate Director Jeff Morris.

“The flexibility allows us to be more innovative in how we educate children, which is the original mission of charter school legislation,” Nance said.

“We’re able to package it in a little bit different way,” Morris said.

Gray Stone has used that flexibility to implement a trimester system, rather than the traditional semesters or quarters.

The trimester system adds flexibility to the students’ schedules, cuts down on the number of classes students have to take at a time and allows the school to offer classes on more topics.

“There was not a lot of room for failure.” Morris said, explaining that if a student failed Math I during his or her freshman year, there was no way they could graduate with their peers.

The trimester system cuts down the number of classes a student takes at a time, as well, which encourages better student engagement.

“We felt like our students were not fully engaged in all six of their classes,” Morris said.

Theresa Casmus said they chose Gray Stone for her son, Will, because the school’s mission best suited their family’s needs.

“That’s the beauty of a charter,” she said. “They set out what their mission is. It might not be the same focus as a public school. It’s different.”

“Gray Stone does not meet the needs of every child,” Casmus said, but added that it was a good fit for her son.

Casmus attended the open house for both Salisbury High and Gray Stone, and she said there was a “night and day” difference between the two.

“Will is an excellent student. He would have succeeded at Salisbury High School, but I wanted better for my child,” she said.

So, they decided to give Gray Stone a try, and agreed to reevaluate things the next school year.

Casmus said she initially did have some concerns about going the charter school route, especially about the long drive each day and taking Will out of his group of friends and peers.

Those concerns turned out to be unsubstantiated, she said.

The school’s small size is both a blessing and a curse, Casmus went on to say.

While students are afforded more opportunities than they would be in a larger high school, those who hope to play college athletics, particularly at a Division I school, are unable to obtain the athletic scholarships necessary.

“It has its limitations,” she said.

While Rowan County doesn’t currently have a charter school, that hasn’t always been the case.

Rowan Charter Academy was approved in 1990, but the school relinquished its charter for financial reasons in 2006.

“Charter schools typically close for a couple of reasons – governance and finance,” said Deanna Townsend-Smith, Lead consultant in the office of charter schools.

Kannapolis Charter Academy has submitted its charter application to the state and could open as early as fall 2016.

On April 13, the Charter Advisory Board will interview the school’s board and will make a recommendation.

The school would serve kindergarten through sixth grade its first year and add an additional grade each year until it reaches eighth grade.The would also grow in capacity each year for the first four years, starting at 661 students until it caps out at 1,145 students.

Paul Lawrence Dunbar Academy could open in East Spencer as early as fall 2017, and would have an emphasis on STEM, or science, technology, engineering and math.

The school would serve kindergarten through third grade the first year, and add an additional grade each year until it reached eighth grade.

Dunbar Academy would be operated by A New Beginning 2, a community development corporation.

Students will be able to take classes online at home from anywhere in North Carolina.