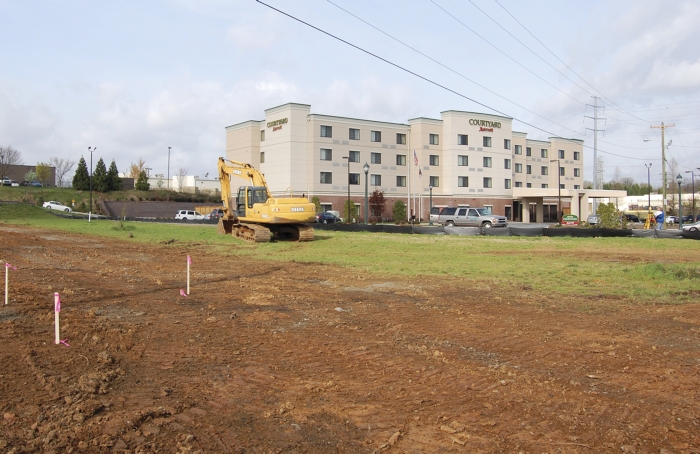 A Holiday Inn Express will be built next to the Courtyard Marriott in Salisbury. Another hotel is planned for a site on Jake Alexander Boulevard. New hotels are a good sign for the area's visitor economy, including tourism.

Work is underway at the site of a new hotel off East Innes Street and City Council will discuss another proposed hotel Tuesday.

Land grading has started at the site where a Holiday Inn Express will be built next to the Courtyard Marriott on Marriott Circle near the Interstate-85 on-ramp. The four-story, 90-room hotel will be on two acres next to exit 76. Both hotels are owned by BPR Properties, based in High Point.

Another hotel is being proposed at a location off Jake Alexander Boulevard. Narsi Properties has plans to build a six-story Home2 Suites by Hilton between the Econo Lodge and the I-85 on-ramp. The hotel is planned to have 93 rooms.

James Meacham, executive director of the Rowan County Tourism Development Authority, said the new development shows the growth in the visitor sector, including tourism, of the area’s economy.

In 2014, Rowan had the 8th fastest growing tourism sector among all the counties in the state, Meacham said.

He said hotel revenues in the county have been increasing month to month since 2013. And hotel occupancy taxes bring in around $750,000 a year in revenue that’s split between tourism efforts for the county and for Salisbury.

And, of course, more jobs. A hotel like Holiday Inn Express will employ 15 to 20 people, Meacham said.

Meacham said having a variety of hotels to offer consumers is an important component for an area’s visitor economy.

Together, the Courtyard Marriott and Holiday Inn Express will make up the loss of 181 rooms from the closing of the former Holiday Inn on Jake Alexander Boulevard.

City Council approved the plans for the Holiday Inn Express in August. When it opened in 2013, Courtyard Marriott was the city’s first new hotel in 13 years.

The city’s Planning Board approved the Conditional District Overlay for the Home2 Suites last month. Due to the land parcel being so small, just 1.4 acres, the developer is requesting to have the building be six stories, which is two stories higher than the allowed limit in the city’s commercial mixed-used zones.

Because of state Department of Transportation regulations, no left turns will be allowed into or out of the hotel parking lot, and the developer will have to pay the cost of having a median installed on Jake Alexander Boulevard to prevent left turns into the hotel. Drivers heading south on Jake Alexander Boulevard will have to make a U-turn at the traffic light in front of the Econo Lodge in order to get to the hotel.

With the new Holiday Inn Express, the county will have a total of about 900 hotel rooms, and if the Home2 Suites is built, the figure will be about 1,000, Meacham said. That should be good enough to support the demand in the county for the next few years, he said.