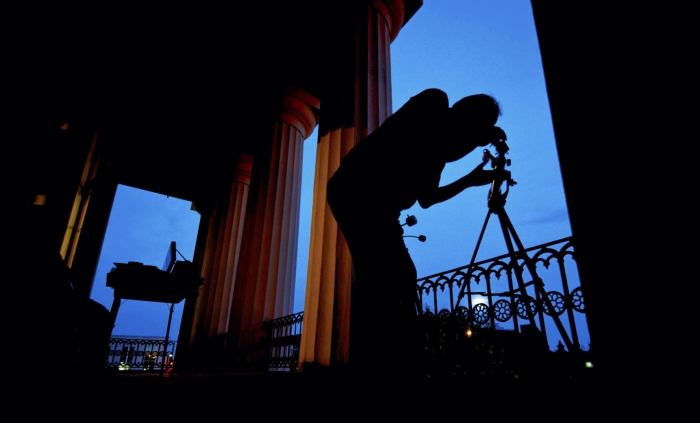 JON C. LAKEY / SALISBURY POST The Astronomical Society of Rowan County set up a couple of telescopes on the second floor porch of the Rowan Museum and the after dark visitors got a chance to view a faint cloudy moon.

“Turn around, you know you want a hot dog!” read a colorful sign in front of Jack Rabbit Slim’s. Sure enough, that’s what folks were doing.

A white carriage led by a black horse clippety-clopped down Main Street, glinting in the late-afternoon sun.

“Buying junk, antiques” read a hand-lettered cardboard sign at Anthony’s, located at the former Smoke Shop. A wide variety of treasures was spread out on the sidewalk out front.

Beth Moore, executive director of Prevent Child Abuse Rowan, was handing out free Cheerwine floats with staff members. There was also a basket of brightly decorated Easter cookies being distributed, too.

The floats drew the interest of Drew and Tiffany Long, and their daughters Caleigh, 5, and Kinsley, 3.

“We won’t turn that down,” Long said.

The Longs are Catawba alumni, although Long was sporting a Duke T-shirt in anticipation of tonight’s Final Four game.

“We came to build birdhouses for the ecological preserve,” Tiffany Long said, referring to the free activity which took place at the Downtown Catawba office. That way, she said, their daughters, too, had a connection with the campus.

As the Longs enjoyed their treats, Marley was making lots of new friends.

Marley is a Labrador Retriever and a therapy dog.

“Please ask to pet me” read a sign on his harness, and it was clear that Marley loved being petted.

At the next corner, Matthew Church played acoustic guitar in front of an appreciative crowd at Thread Shed. Most visitors were taking full advantage of the warm weather, wearing shorts, T-shirts and flip-flops.

A guitar duo was playing in front of Uncle Buck’s, as diners enjoyed a meal at picnic tables.

Still closer to the Square, Glen Yost was surrounded by folks as he practiced his show of magic and comedy.

Ladies from United Christian Fellowship Church on Miller Road staffed a table nearby, passing out hot pink flyers for their Backpack Giveaway program.

Pottery 101 owner Cheryl Goins held court at her usual spot behind the counter. Many merchants were dressed in period attire — courtesy of Eastern Costume Co. — in observance of the History Alive theme. Goins had her own “historical” garb going on — a giant feathered boa around her head and tinted hippie sunglasses.

She was dressed as, well, Janis Joplin.

“Who else would I be?” Goins asked.

Beside her sat Rachel Gunsch, sporting a leather jacket and goggles, dressed as Amelia Earhart and talking on a cordless phone.

Goins and Gunsch attributed the light crowd to the fact that it was Easter weekend, and last night was Good Friday.

“It will be a nice time for families to come out before or after church,” she said.

Additionally, the History Alive theme tied in with the Annual Colonial Spring Frolic at the Old Stone House, 770 Old Stone House Road, which takes place today from 10 a.m. to 5 p.m.