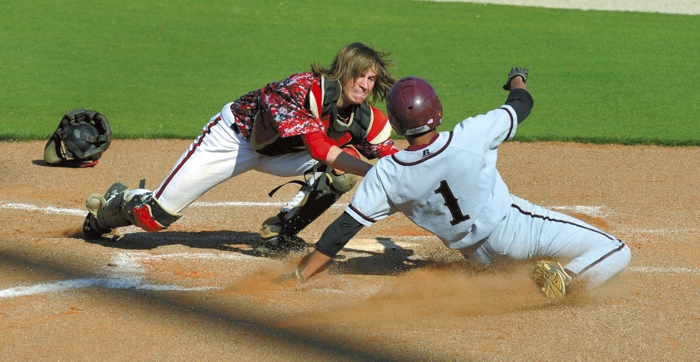 photo by Wayne Hinshaw, for the Salisbury Post Above, South Rowan catcher “Shaggy” Wyatt tags Robinson’s Austin Johnson (1) out at the plate. Below, South’s starting pitcher, Austin Corriher, deserved a better fate as the Raiders committed nine errors in the field.

KANNAPOLIS — South Rowan picked a bad time to play its worst game of the season on Saturday.

The defending champion Raiders committed — sit down for this — nine errors in a 7-3 semifinal loss to J.M. Robinson in the F&M Bank Classic.

“We don’t play that way normally,” disappointed coach Thad Chrismon said at CMC-NorthEast Stadium, where South (10-2) had its seven-game winning streak snapped. “We did today.”

Call it a bad day at the office. The Raiders have spent the season’s first month surprising everyone but themselves, but had none of that mojo working against Robinson (7-4).

“They’ve had success all year, and always seem to do well in this tournament,” said winning coach Jason Sarvis. “But they didn’t have their best day and we took advantage of some of their mistakes.”

“We got off to a good start,” said Kocher, the winning pitcher. “But any time you can get any runs, anyway you can, that helps you out.”

Kocher, a junior with a snappy fastball, allowed just one earned run in five innings. He tiptoed through a minefield in the bottom of the first inning after South loaded the bases with one out, but escaped by fanning Eric Stowe and inducing Burke Fulcher to ground out.

Robinson padded its lead with single runs in the third and fourth innings before the Raiders got on the board in the last of the fourth. Fulcher lined a leadoff single to right-center field and moved to second when Colson Childers drew a four-pitch walk. With two away, Tyler Rary lifted a high, wind-blown popup that shortstop Seth Johnson misplayed for a run-scoring error.

Instead of rallying around the play, the Raiders continued to play defense like it was someone else’s job. Robinson extended its margin to 7-1 in the fifth inning, when its sandwiched C.J. White’s base hit and Kocher’s sacrifice fly around two more South errors, a walk and a passed ball.

“They had a bad day,” Sarvis said after South made a hasty, post-game exit. “We’ve all had days like that. That’s how baseball goes sometimes. I’m sure they’ll be able to regroup from this.”

South did make some late-game noise when it scored twice in the last of the sixth inning. Fulcher walked, Childers reached on one of Robinson’s four errors and Zach Tatarka was hit by pitch — loading the bases with none out and chasing Kocher.

Christian Fisher relieved and promptly surrendered one run on a passed ball and another when Rary’s grounder to short was misplayed. South put two runners aboard in the seventh frame against White, Robinson’s third pitcher. But a pickoff at second base and a line-out to right ended the debacle.

“It’s never a good time to play like that, ” said Chrismon. “Our goal is to get better every day. We didn’t do that today.”