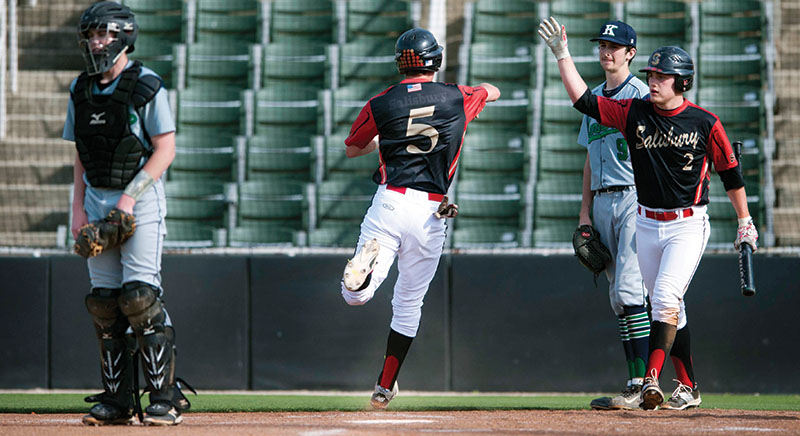 KANNAPOLIS — Salisbury scored a grand total of three runs while splitting its recent Central Carolina Conference series with East Davidson, so coach Scott Maddox was all smiles after an easy 10-1 win against A.L. Brown in the F&M Bank Classic.

“Five runs is an offensive explosion for us,” Maddox said. “So 10 runs is pretty crazy.”

It was a solid performance by the Hornets (7-3) in the first-round contest, and they advanced to a 6:30 p.m. semifinal on Saturday against Northwest Cabarrus at CMC-NorthEast Stadium. The Wonders play Canton Pisgah in a 1:30 p.m. consolation game.

“One of our goals was to play three games here at this ballpark, and now we’re assured of doing that,” Maddox said.

With pitcher Riley Myers doing a good job of holding runners, Salisbury catcher Will Steinman caught two runners attempting to steal second early. That took the steam out the Wonders, who wanted to be aggressive on the basepaths.

“That did helped set the tone,” Steinman said.

The Wonders scored in the top of the first. Myers walked two batters, and Damon Johnson rapped a two-out single up the middle to score Clayton Gilmore.

“We had good eyes, drew walks and got baserunners,” Johnson said. “Their pitcher liked to throw it low, but I adjusted and got a good base hit. It was a great start, but then we started making mistakes and we got down. That’s been our problem lately.”

The Wonders (6-7) lost their fifth in a row after starting the season on a roll.

“But it’s all fixable.” Johnson said.

Myers threw well after a shaky start, although Maddox limited him to 40 pitches. Myers is scheduled to start Tuesday’s CCC game against North Rowan.

“The first inning just seems to be a curse for me,” Myers said. “But Will (Steinman) helped me out a lot, and I settled down.”

“We took advantage of their mistakes,” Maddox said.

The Hornets got two more in the sixth. Myers doubled, J.T. Austin tripled, and a run scored when John Yang walked with the bases loaded.

Freshman Griffin Myers was credited with the win in relief of his older brother. Harrison Smith got the last three outs after Griffin Myers ran into control issues in the seventh and walked the bases full. The game ended on a line drive that Riley Myers gloved at shortstop and turned into a double play.