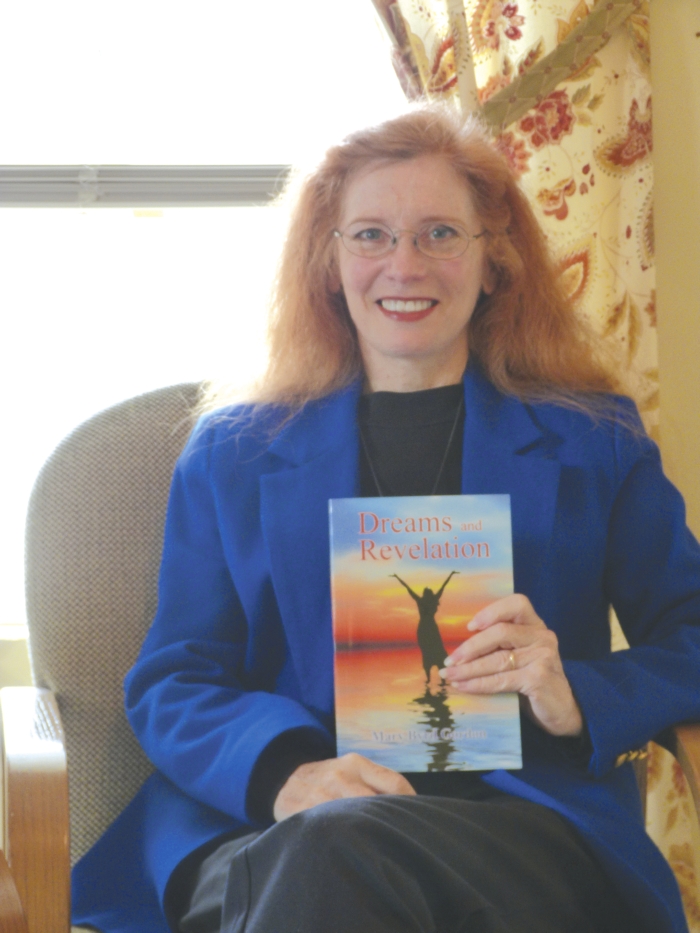 Mary Gordon, co-pastor of Gay’s United Methodist Church in Woodleaf, is the author of a new book, “Dreams and Revelation.”

by Rebecca Rider
Mary Gordon believes in the power of dreams, but she didn’t start writing about them until recently.

Gordon, co-pastor of Gay’s Chapel United Methodist Church on Woodleaf Road, is the author of a new book, “Dreams and Revelation,” which focuses on the ways God uses dreams to communicate with humanity. It’s a form of revelation that was very common biblically.

Gordon says that the same is true, today. To many people, dreams are a mystery.  Something that’s forgotten quickly after waking, a hazy remembrance.  But that’s the way it’s supposed to be, she says. Dreams are a puzzle, and Gordon believes that many, but not all, dreams are like the parables of the New Testament—if we could only understand the biblical symbolism, we would find an incredible message. In her book Gordon set out to trace the path of how she solved those puzzles and received those messages in her own life.

Gordon started writing the book in May 2014, after sharing dreams she’d had with a member of her congregation who was under Hospice care.

“She was very touched by them,” Gordon said.

And she found that sharing dreams was inspiring. Gordon has been keeping dream journals since the late 1980’s, and after talking about her dreams with someone else, she struck upon an idea.

“What if I could tell my story through the dreams God had given me?” she said.

Her husband, Frank, had been trying to get her to write a book for years, she said, saying that she had a story to tell. And Gordon wanted to write something, as well, but never knew what. Until May.  Gordon says she just sat down at the computer and “started listing dreams.” When she stopped writing in January 2015, she had a book in two parts.

The first part of the book focuses on dreams, while the second focuses on revelations she’s had. Each is followed by a reflection—what was going on in her life at the time, what God revealed through the dream, and how it affected her.

One revelation she shares she received while struggling with a call to be a minister back in 2001-2002. Gordon says she felt conflicted because of gender. She didn’t feel she should be a minister because she was a woman. But she said that God brought a picture to her mind of two horses pulling a cart, and she understood it to be she and her husband, Frank, working in tandem. And she had a realization.

“This was not about gender. This was about what the Lord had called us to do,” she said.

Gordon says she couldn’t have written the book without her congregation. The Gordons have been pastoring Gay’s Chapel United Methodist for three years, and while they’ve shepherded churches from Murphey to Norwood, she believes that with Salisbury, God saved the best for last. Everything — from the loving atmosphere of prayer and support from her church, to the local artists who provided artwork, to the help with publishing by Diversified Graphics — inspired her and kept her going.

“This is really a Salisbury book,” she said.

She hopes that people who read her book will realize that God still speaks through dreams, and that is is a biblical reality.

“God is wanting to communicate,” she said.

As proud as she is, Gordon admits that it’s not a perfect book. But then again, Gordon says she’s not the perfect person, and the book is the story of her faith. And people have responded to her openness and transparency, she said. Readers have identified with it, and have begun talking about their own dreams.

“I’m getting e-mails, messages through Facebook–someone sent me pages of dreams they had,” she said.

Gordon has had a long walk with God, and she’s thankful for that and looks forward to the good things he’ll bring in the coming years.