You’ve never seen Shakespeare like this, and you should 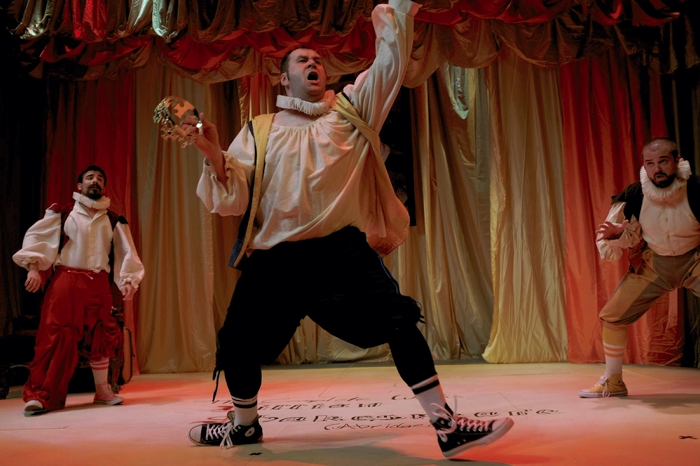 In this comedy of errors, all’s well that ends well, despite Romeo and Juliet’s ill-fated love and Hamlet’s heartless demand of Ophelia.

If you understand that, you’ll have a blast at Lee Street theatre’s production of  “The Complete Works of William Shakespeare (abridged).” If you didn’t get it, you’ll still have a good time.

From the playwrights (comedy writers?) who brought us “The Complete History of America (abridged)” and “All the Great Books (abridged),” comes this comi-tragi-histowhat concoction, played by three guys who must be exhausted every night.

They have to ad-lib a lot, too, as the play is full of contemporary cultural references, and those change in the blink of an eye. They’ll be rapping one minute and oogling Google the next.

Probably the most amazing moments come at the end, when they do “Hamlet” backwards. I mean they do the action backwards, and all the lines. That’s a feat of phenomenal proportions. For one thing, it comes after 90 minutes of spoofing and goofing all 37 of the bard’s plays.

They start with the tragedy of “Romeo and Juliet,” with a balcony scene like none you’ve ever seen. There’s sword play and a parody puppet show thrown in, too.

Then they prance around acting as the kings in Shakespeare’s histories, including the recently buried Richard III, and the lusty Henry VIII, not to mention the complicated Henry VI, who needed three plays to cover his exploits. And there’s poor King John, lumbering across the battlefield.

Their “Titus Andronicus,” Shakespeare’s bloodiest play, got a bloody spoof, too, with the king appearing as a television chef. “Othello” skated a fine line of political correctness, Lear made a brief appearance, Julius Caesar was interrupted by “Antony and Cleopatra” and a snake.

The play you cannot name while in the theatre, euphemistically called “The Scottish Play,” was a fine wee slice of young Scots lairds on the golf course in their kilts. Spot-on accents made the great tragedy a guffaw-a-minute vignette. The trio scored above par, but in a good way.

The comedies went by in a bit of a blur, but there are more comedies than anything else. Puck, of “Midsummer Night’s Dream” was mentioned, along with Bottom, because they’re just funny words, and there was a visit from the “Merchant of Venice,” as well as the shrew and the twins (lots of twins) and the merry wives who make “Much Ado About Nothing.”

And all that was before intermission. In one very fast hour, the guys had covered 36 of the plays. After a brief review, they realized they’d skipped over “Hamlet.” Well, things got very emotional then and Jacob did a runner, with Brian in hot pursuit and Jason left feeling love’s labors lost. Oh, and then there was intermission, which must have been something of a relief to the players strutting and fretting their hour upon the stage.

Now, there’s a weightiness to “Hamlet” and our dear thespians were loathe to approach it, some more loathing than others.

Once it began, Brian broke down during Hamlet’s most famous introspection, the speech that has crippled many a fine actor, the speech we all had to memorize in high school. THE speech. “To be or not to be, that is the question …”

Brian could not be, and collapsed in tears on the stage. And again, and again and again, until it was obvious an intervention was called for.

You’ve never seen a “Hamlet” quite like this, with so much complex Freudian motivation that required extensive audience participation. With the id, the ego and the superego conflicted. It was hysterical in a good way, though there was a moment …

“Hamlet” took up the entire second act, being the stage hog he is. The fun comes in compressing it and compressing and compressing, until it takes less than a minute to tell the story. These are the moments when the surely tired actors must leap great bounds and emote great feeling and say their lines backwards.

The opening night audience was small, which was too bad, because these guys played their hams off. But a round of applause, whistles and huzzahs rewarded them.

Justin Dionne drilled – er, directed the team and Chris Speer designed the set and lighting. It was very interesting to see a stage set up where the audience usually sits, great to have it in the half-round. Voluminous curtains and one chair made up the set. Mary Ann McCubbin did props, and there were lots of them. Cody Mangum was stage manager, lighting designer, joke target and pseudonym and Verity Pryor-Hardin helped with movement and gestures, though those guys probably know several of the more questionable gestures employed.

“Shakespeare (abridged)” goes fast and you’ll be amazed at how quickly it’s over. With a fine selection of rude gestures, this may not be the play for the kids, but it’s a hilarious way to make Shakespeare more palatable to the weak of mind.