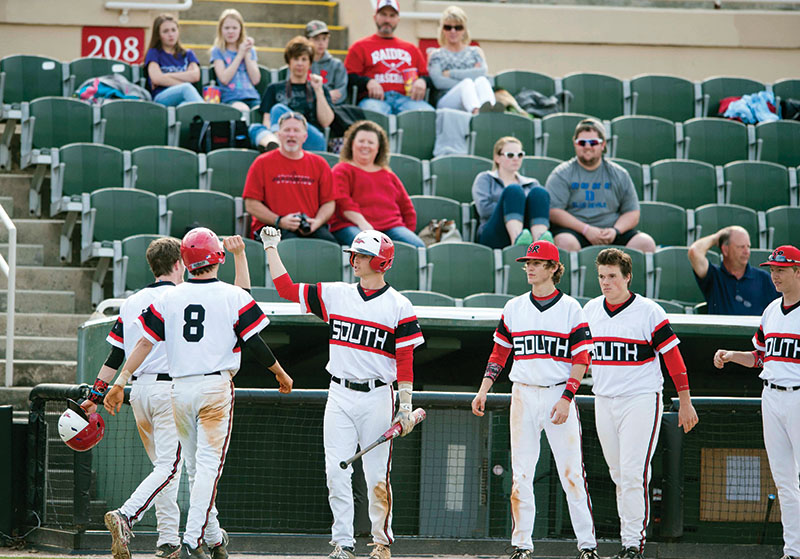 KANNAPOLIS — South Rowan is the defending F&M Bank Classic champion, and it went into the tournament’s opening game against Lake Norman riding a seven-game winning streak.

Yet South Rowan games still have an underdog feel to them.

“All I know is 10-1 feels pretty good,” shortstop Peyton Penninger said. “And our chemistry is really good.”

South Rowan flirted with disaster in the bottom of the third, fourth, sixth and seventh innings Thursday in a first-round Classic game at CMC-NorthEast Stadium, but it held off talented Lake Norman 5-3 in a thriller.

South Rowan advanced to a 4 p.m. semifinal on Saturday against the winner of Friday’s Carson-Robinson game.

The Raiders have little power and their pitchers don’t light up radar guns, but the Raiders have a good combination of speed, defense and players who believe they’ll figure out a way to win. They won 22 times last year with basically the same cast of characters.

“I think we’re getting better,” South Rowan coach Thad Chrismon said. “Last year we had to come back a lot. This year we’re getting a lead and holding it. Hopefully, we’ll keep on improving.”

South Rowan’s three-run third turned the game. Walks, a hit batsman and two errors were sandwiched around a soft double that Penninger parachuted into right field.

Johnson allowed a triple to Ladowski in the third, but second baseman Chandler Corriher made a diving catch of a liner to strand Ladowski.

South Rowan built its lead to 5-2 in the fourth when Tyler Rary and Penninger got on base, and Hunter Travis slapped a two-out, two-run single up the middle.

“All their pitchers were good,” Travis said. “I didn’t try to do too much, and with two outs, I was just trying to make contact to get a run in. I had a job to do. That’s what we focus on — doing our jobs.”

Johnson allowed back-to-back singles to start the fourth but worked out of it. He pitched a scoreless fifth. Then Chrismon turned to the bullpen.

Sophomore left-hander Dillon Norton was in trouble immediately in the sixth when Jared Stukbauer doubled and Nick Pasco singled. With runners at second and third and no outs, Chrismon brought in his infield.

Back-to-back grounders went straight at Penninger, and both times he held the runners and got the out at first. Lake Norman eventually got a run in the inning, but Penninger made a diving stop in the hole to get the third out.

“That was just reaction,” he said. “Credit our pitcher for keeping the ball down.”

“We trust our young pitchers, and we calculated the odds and felt we could get groundballs with the infield in and make plays,” Chrismon said. “We saved some runs there. If you miss a spot and someone hits a bullet, you look bad, but we did our jobs.”

The bottom of the seventh was even more dramatic.

Ladowski hammered a flyball to right for the first out. After Zach Little’s single and a booming double by Zayicek, the Wildcats had the tying runs at second and third with one out. Chrismon went to the pen again — this time for sophomore Walker Joyce.

The tension mounted, but Joyce got ahead quickly and struck out Stukbauer. Then he got Pasco to sky one to center for the final out.

“We beat a good team, but there are things we have to get better at,” Chrismon said. “We had a runner at third with no outs and didn’t score. That’s a run we gave away, and we can’t do that. Even against tough pitching, we have to put the ball in play.”