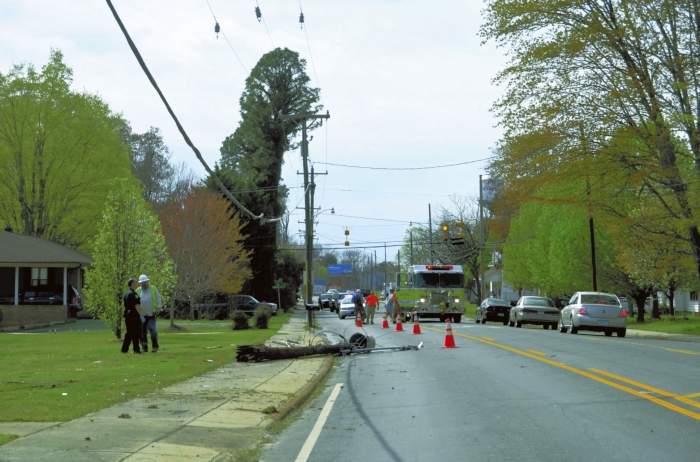 The driver, whose name was not immediately available, was traveling on East Main Street near the 100 block of Hambley Street when he took his eyes off the road momentarily, said Police Chief Hugh Bost.

Bost said the driver either looked down to pick up something or looked away from the road and crashed into the utility pole, toppling the pole and ripping it away from the line.

Police initially believed the driver was texting, but soon learned he was distracted, Bost said.

When the driver returned his attention to the road he had no time to stop, and struck the pole. The vehicle came to rest in the front of Rockwell United Methodist Church, narrowly missing a man mowing the lawn.

The driver and a female passenger were treated at the scene and taken by ambulance to the hospital.

Both the driver and passenger, whose name was also not immediately available, were wearing seat belts.

If they weren’t wearing seat belts “it may been much worse,” Bost said.

The crash occurred just before 4 p.m. Bost said residents and businesses in the area, including Rockwell Police only lost power for a few seconds. He said the lights flickered. Duke Energy was still working around 7 p.m. to replace the pole.

In addition to Rockwell Police, Rockwell City Fire Department responded as did Rowan EMS. Traffic was shifted to one lane on East Main Street so motorist could pass through.