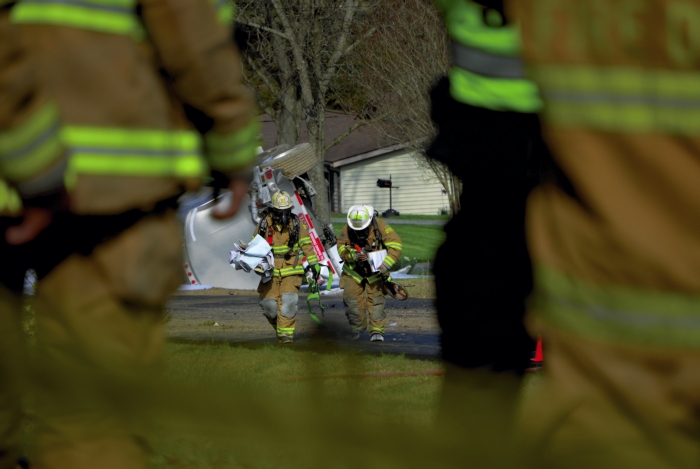 Emergency responders walk away from an overturned tractor trailer accident at 11510 Bringle Ferry Road where the driver was killed. He ran off the road to the right and lost control. A portion of the 8,000 gallons of ethanol spilled onto the road. There were four homes that had to be evacuated. Shavonne Walker/Salisbury Post

Because of the proximity to a drinking water well at one of the homes, remediation company personnel recommended the two families not return to their homes just yet, said Frank Thomason, chief of emergency services.

The accident happened at 6:47 a.m. after the driver ran off the road, lost control of the tractor-trailer and overturned. A portion of Bringle Ferry Road was closed near Surratt and Panther Creek roads. The area was shut down much of Thursday until crews could contain and then remove the ethanol. The road was finally opened at 11 p.m. on Thursday.

Sechler was with Eco-Systems, a company based in Franklin, Tenn. He’d just left a fueling station in Denton before the crash. There were about 75 people from 14 agencies who responded to the scene, including local and regional hazmat teams, fire and other emergency personnel.

Trooper J.G. Leonard told a Post reporter on Thursday that investigators with the N.C. Highway Patrol were not able to determine an immediate cause of the crash. He said officials will await a report from the medical examiner.

The forced evacuation of the immediate area was due to fire and explosion hazard concerns from the tanker, which was carrying 8,000 gallons of ethanol, Thomason said.

He added that about 3,500 to 4,000 gallons leaked from the tanker onto the ground and surrounding areas, but did not reach a nearby creek as earlier reported.

“Due to the closeness of the drinking well water at one of the residences, which also provides water to the second home, a decision was reached with cooperation of the residents and property owners for them not to return to their residences at this time,” Thomasons said.

Officials with the trucking company, Eco-Systems, along with the remediation company, Hepaco, are working diligently and closely with the residents for their safety and that of their property.

Thomason said over the next several days, clean-up crews will be removing the remaining spilled material and performing tests on the well to ensure its safety.

Eco-Systems is working to place the residents in a local hotel and take care of any other immediate needs during the clean up process and completion of the well testing.