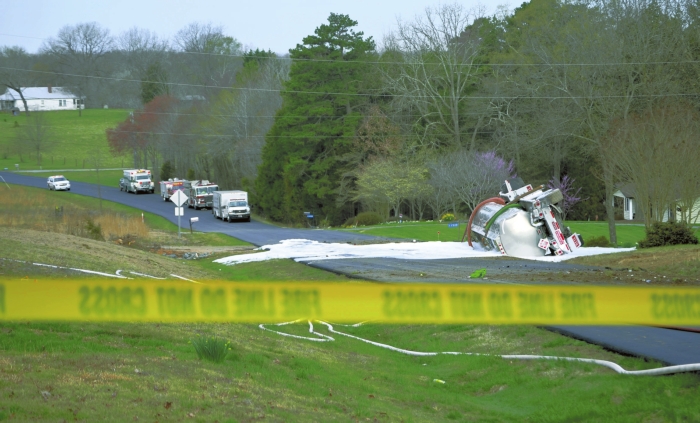 About 75 fire and emergency personnel responded to this overturned tractor trailer at 11510 Bringle Ferry Road. The tanker spilled a portion of the 8,000 gallons of ethanol that was on board. The driver, James Richard Sechler, died during the crash. He ran off the road to the right, lost control and overturned.

N.C. Highway Patrol officials have identified the driver of a tanker that overturned on Bringle Ferry Road on Thursday morning, spilling ethanol, as James Richard Sechler, 62.

Sechler, of Shinn Farm Road, Mooresville, was killed when the truck went off the road and overturned.
N.C. Highway Patrol Trooper J.G. Leonard said there is still no indication of what caused the crash. Officials will have to await a report from the medical examiner, which could take weeks.

“Speed does not appear to be a factor. There was no braking prior to impact,” Leonard said.

The driver was the only one in the truck, Leonard confirmed.

Emergency crews worked all day to contain the contaminant, which did spill into a nearby creek and onto the ground in the front of a home at 11510 Bringle Ferry Road, near Panther Creek Road and not far west of the Pooletown area. Bringle Ferry Road was blocked off at Panther Creek Road on one end and Surratt Road on the other, while crews continued to work throughout the day.

Leonard said crews remained at the scene until well after 8 p.m., and the road remained closed.

Residents at that home where the crash occurred and at three other nearby homes had to be evacuated until the crash site was cleared and the ethanol removed. One home across the street from the crash was far enough from the road that the property owners did not have to evacuate, but were contained inside their home. No residents were harmed.

The tanker was from a company called Eco Systems based in Franklin, Tenn., but the driver had just returned from a fueling terminal in Denton. Sechler was carrying 8,000 gallons of ethanol. Officials were unsure of how much of that 8,000 spilled onto the roadway.

Sechler was still inside the cab of the tractor trailer for much of the day because crews had to clean up the ethanol spill and roll the tanker over before they could remove his body.

The N.C. Highway Patrol investigated the crash, but because of the fuel spill they were not able to begin an in-depth investigation until late Thursday afternoon. Contributing circumstances to the crash have not yet been determined.

According to a release from the N.C. Department of Public Safety, the leak was contained before 11 a.m. and the scene around that time was considered safe.

Thomason said there was a potential risk of the alcohol exploding. He said the substance was highly flammable, but crews poured foam onto the truck and liquid. Crews also used absorbent booms to soak up some of the material.

There were 27 agencies on the scene totaling 75 personnel.

And other local resources: The American Red Cross.