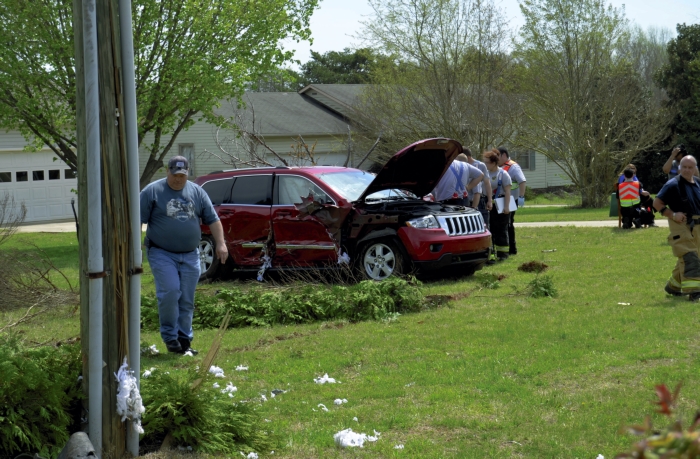 Locke Fire Chief Rusty Alexander, left, walks from an accident scene where the driver, Karen Pell, struck two trees and this utility pole before coming to rest in this yard. Locke Fire Department, N.C. Highway Patrol and Rowan EMS responded to the scene. Pell was not injured. Shavonne Walker/Salisbury Post

A Salisbury woman was not injured when her vehicle left the roadway, crossed into the path of another vehicle and struck a tree and utility pole.

Karen Pell, 59, of the 200 block of Brook Valley Drive, was shaken but not hurt following the Friday afternoon crash at the intersection of Airport and Miller Chapel roads.

The crash occurred at 12:08 p.m. while Pell was coming out of a curve on Miller Chapel Road.

Instead of going into the curve she kept straight, said Trooper B.P. Potts. Pell ran off the road to the right, hit a sign, overcorrected and traveled onto the left side of the road where she struck two trees and and the pole, he said.

She was driving a 2011 Jeep Cherokee when she traveled into the path of a vehicle driven by Gary Horne, who was on Airport Road. He was not injured and his car was not damaged. He was able to stop in time.

He told a Post reporter when he parked and got out of his car he saw Pell’s car. He saw the tree that was sticking from the back side and he thought it had gone through the vehicle. He thought she’d be in bad shape.

Pell’s side airbags did deploy and she was wearing a seat belt.

Horne initially said from talking to Pell that he believed she had car trouble, although there is no indication she had any mechanical issues. He also said he thought she drove between the tree and the utility pole, however Trooper Potts confirmed she hit the tree and the pole.

Potts said charges are pending. Speed nor impairment were factors in the crash. A crew from Time Warner Cable responded to finish cutting the line that was attached to the pole. Locke Fire Department also responded, but according to Chief Rusty Alexander they did not have to render any aid.

Rowan EMS checked Pell before leaving from the scene. A crew also arrived to the scene to replace the utility pole.