Golf: Woods to tee it up at Augusta 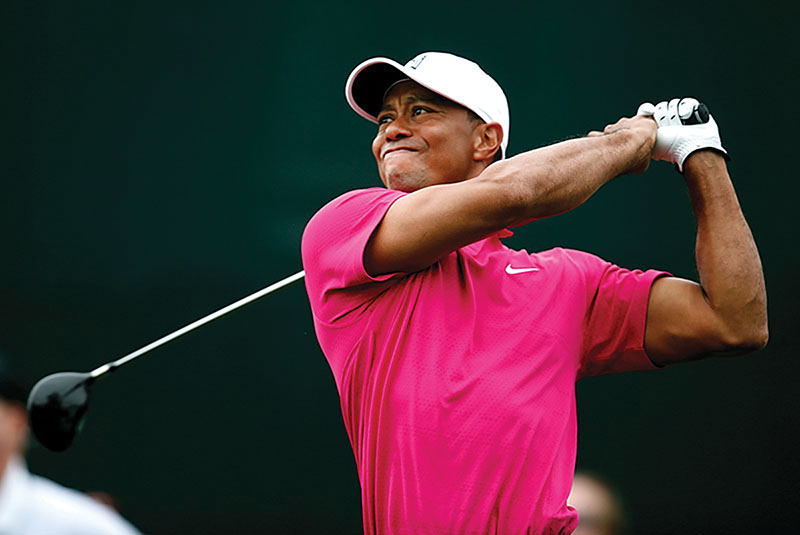 The Associated Press Tiger Woods, shown here playing in January in Arizona, announced Friday he will play the Masters. After two trips to Augusta National this week, Woods announced his return to competition on his website. He wrote: "I'm playing the Masters. It's obviously very important to me, and I want to be there."

Tiger Woods ended all that speculation about his game by letting everyone see for themselves.

He said Friday he will play next week in the Masters.

Golf’s biggest attraction and four-time Masters champion played two practice rounds at Augusta National this week before a simple announcement on his website that he would end his two-month leave on the sport’s biggest stage.

“I’m playing in the Masters,” Woods said on his website. “It’s obviously very important to me, and I want to be there. I’ve worked a lot on my game, and I’m looking forward to competing. I’m excited to get to Augusta, and I appreciate everyone’s support.”

Woods was last seen at a golf tournament on Feb. 5 at Torrey Pines. He hit a sand wedge some 30 yards over the green, duffed a chip coming back, bladed the next one too hard and made double bogey. One tee shot later, he withdrew because of tightness in his lower back, saying that his “glutes didn’t activate” after a delay in cool, foggy weather.

Of far greater concern was the state of his game.

Woods has played on two tournaments this year and completed just 47 holes. His short game was shockingly bad at the Phoenix Open, where he shot a career-worst 82 and missed the cut by nine shots. And he didn’t get out of the first round at Torrey Pines.

A week later, he said his game and his scores were unacceptable. “I enter a tournament to compete at the highest level, and when I think I’m ready, I’ll be back.”

Those are words by which he will be judged next week at the Masters.

Woods played an 18-hole practice round Tuesday at Augusta, and he played again at the club on Friday, according to his agent.

He will have gone nine weeks without competition when he hits his opening tee shot on Thursday, which is not unprecedented for Woods. He went nearly five months without playing when he returned in 2010 from a crisis in his personal life that led to one of the greatest downfalls in sport. He tied for fourth that year.

The last time Woods took an extended break before the Masters, he had won his previous tournament at the Australian Masters and was No. 1 in the world after a seven-win season. Now, his game has been in disarray over a series of injuries, physical limitations and another change in coaching.

He hasn’t won a tournament since the Bridgestone Invitational in August 2013. He hasn’t finished under par in 14 months, dating to the 2014 Dubai Desert Classic. And he has plunged to No. 104 in the world, his lowest ranking since Sept. 29, 1996, a week before he won the first of his 90 professional tournaments worldwide.

Woods hasn’t won the Masters in 10 years, though he has managed there even when his game was off. It’s the only major where Woods has made the cut every time.

He missed the Masters last year because of back surgery to alleviate a pinched nerve, and he wound up sitting out three months. Four tournaments into his return, he again dealt with back pain and sat out the final four months of the season to fully recover and get stronger.

But when he returned at his Hero World Challenge in December, he tied for last in an 18-man field and chipped so poorly that some analysts said he had the chipping yips. Two months of practice didn’t help. During the Phoenix Open pro-am, he hit a bunker shot on the 16th hole that shot over the green and into the first row of bleachers.

Chipping and pitching at Augusta National doesn’t not allow for much margin of error, and the scrutiny figures to be at a high level even by Woods’ standards.

When he skipped the Arnold Palmer Invitational at Bay Hill, Woods said he hoped to be ready for the Masters and would continue working.

There have been secondhand reports that Woods was playing a lot at his home club, The Medalist, in South Florida. Golfweek cited a source as saying Woods shot 74 with five birdies when he played Augusta National on Tuesday.

Woods has his own practice facility in the backyard of his home in Jupiter Island, Florida. Going from a private setting to some 35,000 fans figures to be the biggest challenge.

Starting Thursday, that’s what everyone gets to find out.