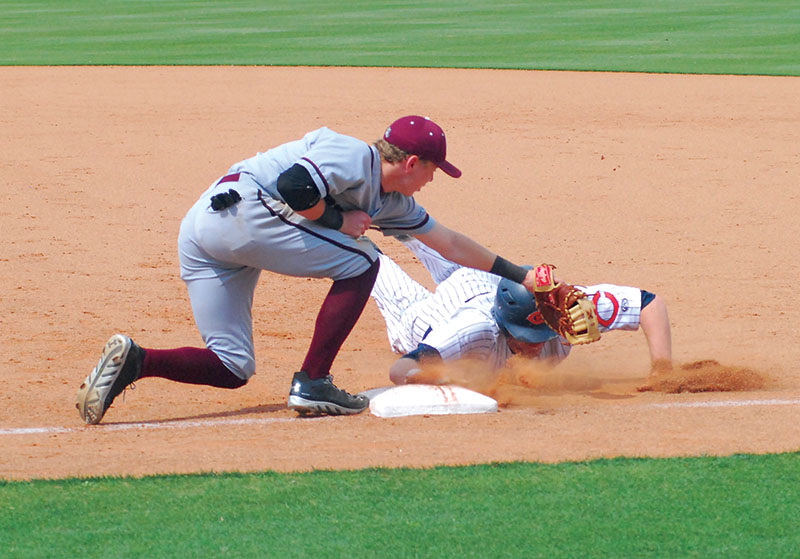 ADAM HOUSTON/THE SALISBURY POST Carson's Heath Mitchem is picked off at first base when Robinson first baseman Tyler Kocher applies the tag on Friday in a first-round game in the F&M Bank High School Baseball Classic. The Bulldogs defeated the Cougars 6-5 in eight innings.

KANNAPOLIS — The first game of Friday’s action in the F&M Bank Classic was tight all the way. Neither Carson nor Jay M. Robinson led by more than one run in a game that needed an extra inning to decide the winner.

“It kind of went back and forth the whole game,” Carson coach Chris Cauble said. “Both teams kind of had some opportunities and didn’t take advantage of them early and pretty much throughout the whole game coming down to the end like it did.

Robinson takes on one-loss South Rowan at 4 p.m. Saturday in the first semifinal. Carson faces Lake Norman at 11 a.m. Saturday in the loser’s bracket. Cauble said Friday’s loss hurts because Carson wanted to sweep all three games and get on a roll before the second run through the SPC.

Left fielder Michael Young was the Bulldogs’ catalyst at the plate. Young led off the game with a triple to the gap in right-center that reached the wall, and he scored on right fielder Nick Weston’s sac fly to left field for a 1-0 lead.

Two errors in the top of the second led to a pair of Carson runs.

Young hit a Texas League single in the bottom of the second that plated two runs to give the Bulldogs a 3-2 lead. He ended the game 3-for-4 with a triple and two RBIs.

With the score knotted at 4 at the start of the sixth, the junior made a catch at the wall to rob Carson catcher Ryan Bearden of a lead-off double.

Carson seized a 5-4 lead in the top of the seventh inning to put itself in prime position for the win. Mitchem hit a one-out double and moved to third on shortstop Owen White’s flyball to center. Mitchem, who had a team-high two hits and two RBIs, scored a go-ahead run on an RBI single by Matt Saul.

Mitchem, however, made a crucial mistake in the bottom of the seventh. In his second inning of relief and with Robinson center fielder C.J. White on third, Mitchem was called for a balk. White was awarded home on the call, and the game was tied at 5-5.

“I felt like I was pitching pretty well. I thought we were going to get out of that (seventh inning), and I balked,” he said. “I don’t know. It was just a bad decision on me. I wasn’t really thinking, wiped my chin, and it was a balk.”

Back-to-back singles and a walk set up Perkins’ walk-off single in the eighth.

Mitchem, who relieved White, was saddled with the loss after working two innings. He gave up two runs on four hits with a pair of strikeouts and a pair of walks.

White allowed four runs on five hits and six walks in five innings on the mound.