College basketball: NCAA to examine laws in other states 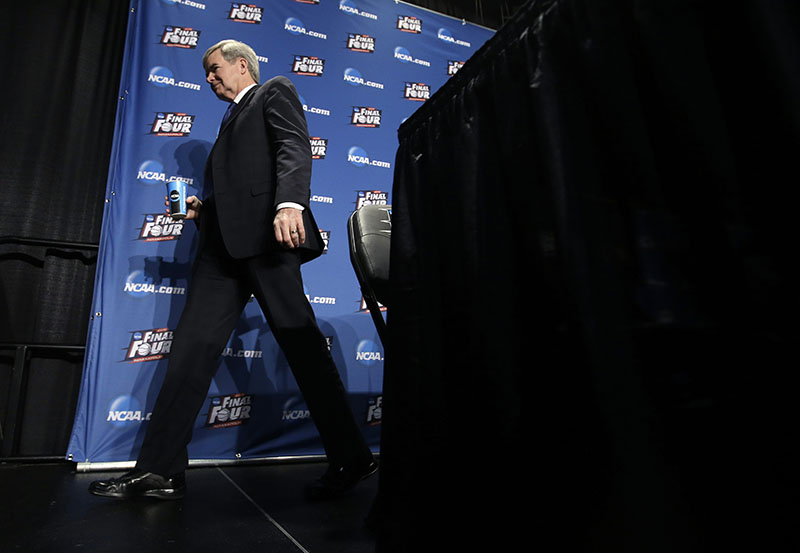 The Associated Press NCAA President Mark Emmert walks away after a news conference at the Men's Final Four on Thursday in Indianapolis.

INDIANAPOLIS (AP) — NCAA President Mark Emmert made it clear the association wouldn’t tolerate discrimination and was willing to take its business out of Indiana if the state’s religious objections law wasn’t fixed to his satisfaction.

Whether he and the NCAA’s leaders can take that stand in other states with similar laws is less clear — and its leaders acknowledge wading into social debates and state law is new and tricky territory for college sports’ governing body.

Emmert’s annual state of the NCAA address on Thursday came as the Indiana lawmakers were revising the Religious Freedom Restoration Act that has, in some ways, overshadowed the start of one of college sports’ biggest events.

“Are we happy that this debate is occurring during the middle of Final Four week? Of course not,” Emmert said. “It would have been a lot easier to have the debate some other day.”

Critics of the law feared it would lead to discrimination against gays and lesbians. Emmert said the law “absolutely, positively” needed to change. About an hour after his news conference at Lucas Oil Stadium, state lawmakers passed a fix that clarified discrimination wouldn’t be tolerated.

Still, there are 20 other states that have similar religious objection laws on the books, and the NCAA has held events in some of those states. The impacts of the laws vary because of language and other civil rights protections in those states, but now the NCAA will have to “look deeper and harder” at where it takes its events, Emmert said.

That raises several questions for the organization, and Emmert fielded them Thursday.

“I think it’s something that we will once again have to talk about among the membership when our boards get together to discuss these issues and decide at what level should we become involved in civil debates inside these communities,” Emmert said.

The threat of pulling events from Indiana was a big one. The organization has put down deep roots in the city since relocating from Kansas in 1999.

While the stakes are higher for the NCAA in Indiana, the question of associating with states with such laws on the books won’t have an easy answer.

“If I believed we couldn’t conduct our affairs in any place in a fashion that didn’t prohibit discrimination against people for any number of reasons, then I would surely recommend that we move,” Emmert said. “I hope that we don’t find ourselves in that place.”