College basketball: Justise does all 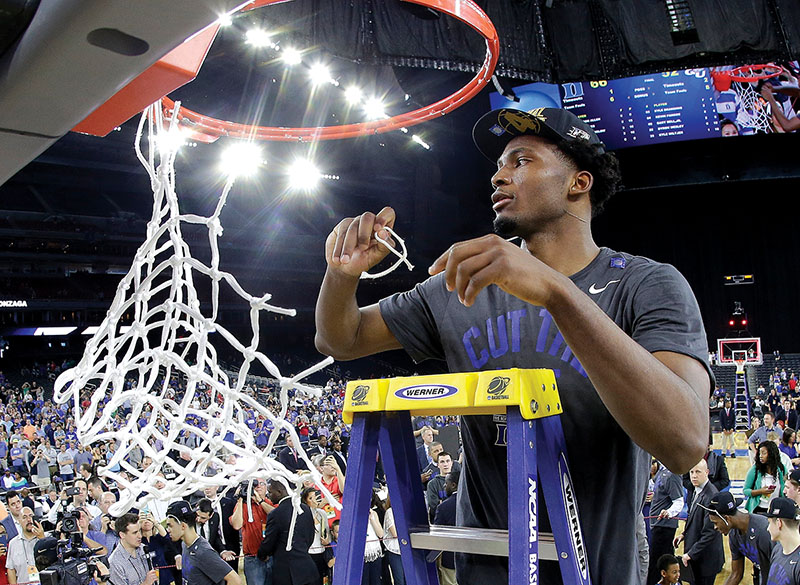 The Associated Press Duke's Justise Winslow cuts down part of the net Sunday after the Blue Devils beat Gonzaga in teh Elite Eight to advance to the Final Four. Winslow's versatility and talent on the court has made him a valuable member of this year's team.

INDIANAPOLIS (AP) — Justise Winslow is ready to do everything — if that’s what it takes — to help Duke win a national championship.

Don’t put it past him, either. He’s spent the past four NCAA Tournament games proving he can.

The 6-foot-6, 225-pound forward scores. He rebounds. He can chase guards along the perimeter or play as an undersized 4-man wrestling against bigger players inside.

On a team led by a potential No. 1 overall NBA draft pick in freshman big man Jahlil Okafor, Winslow has been at his irreplaceable best in March — a big reason why the Blue Devils are back in the Final Four for the 12th time under Hall of Fame coach Mike Krzyzewski with a roster of just eight scholarship players.

“I mean, it’s March,” Winslow said this week. “It’s now or never. … I’m preparing better than ever for the games. I’m just really focused and locked in, and really excited to play.”

This is a case where the numbers say plenty about Winslow’s impact for the Blue Devils (33-4) heading into Saturday’s national semifinal against Michigan State, yet not nearly enough about his value.

An every-game starter, Winslow ranks in the top three on the team in nine different stat categories on the season with his ability to score, rebound, distribute and get to the line.

Every one of those numbers tops his season average, while Michigan State coach Tom Izzo pointed out that Winslow has been better at putting the ball on the floor, too.

“I’ve enjoyed watching Winslow grow because for some reason I’ve seen his growth more, maybe because I haven’t seen him much in high school,” Izzo said Thursday. “His tournament run right now has been very, very good.”

Senior Quinn Cook has gone up against Winslow in practices. It isn’t fun.

“He’s so strong, so it’s hard to even get the ball when he’s denying,” Cook said. “He’s strong, fast and he knows that. …I’m glad he’s on my team because I would hate to go against him in a real game.”

But Krzyzewski sees another reason for Winslow’s strong late-season play, rooted in lessons learned while battling an injury during a rough stretch in January.

“He learned to play not at 100 percent, where he went on the court and was not fighting an injury but still competing,” Krzyzewski said. “We take for granted that all these kids know all those things, and they don’t. Sometimes that’s the first time you’re injured and how you handle it. But he’s become an outstanding player.”