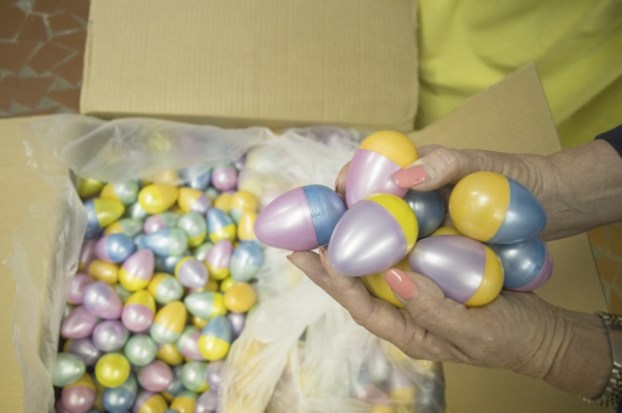 Josh Bergeron / Salisbury Post - Dan Nicholas Park Special Events Coordinator Andrea Baucom holds out a handful of the eggs that will be spread over the park's main field on Saturday for an Easter egg hunt.

Dozens, perhaps hundreds, of egg hunts are scheduled for this weekend in conjunction with the Easter holiday, but one will involve thousands of eggs and an army of children.

Rowan County’s Dan Nicholas Park will have its annual Easter egg hunt Saturday at 10 a.m. Each year, the hunt draws a large throng of people and involves multiple boxes, packed to the brim with eggs. Dan Nicholas Park Events Coordinator Andrea Baucom estimated this year’s hunt could involve up to 14,000 plastic eggs and pounds of individual pieces of candy.

“It takes us about an hour with eight staff members to stock the whole field,” Baucom said. “There’s nothing like it. It’s like a vacuum. After the Easter egg hunt, there is nothing left.”

The hunt will be in a large field near the entrance to the park. Participants will be split into two groups — 5-year-old children and younger and those from 6 to 10. The younger group is usually larger, Baucom said. The older group will start 15 minutes after the first.

The park staff distributes special “prize”eggs in addition to the thousands of regular eggs. The normal eggs are strewn over Dan Nicholas Park’s front field in no particular order. The prize eggs, however, are hidden with more care and are more difficult to find, Baucom said.

With hundreds of people expected, Baucom said park staff usually specifically spaces eggs and candy out from the starting line for safety reasons.

“If we dropped really close, people would go for those first eggs and might get trampled,” She said.

For fairness and because of the large number of people expected, she said parents aren’t allowed to collect eggs with children in the older age group. In the younger group, parents are only allowed if needed, she said.

When Baucom yells “Go!” signaling the hunt’s start, all she can do is freeze in place.

“I literally cannot move because they’re all coming right toward me,” she said. “I just have to wait for them to go by.”

Dan Nicholas Park and its attractions will also be open on Saturday.

FAITH — The memory of one of Rowan County’s most well-known public servants will forever reside on Faith Road. Friends, family,... read more