Those three are at it again! 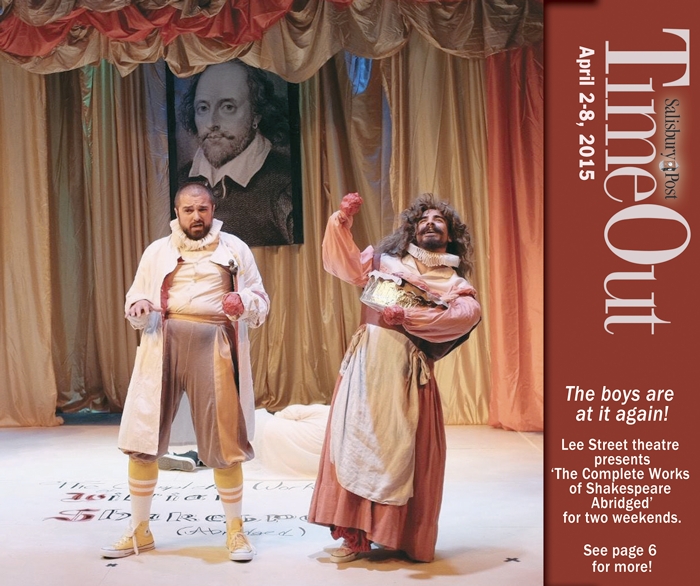 Forget everything you’ve ever thought about Shakespeare: long, boring plays with words that don’t make any sense, maybe a couple of sword fights, and lots of men in tights. Now, imagine all 37 of Shakespeare’s plays smashed together into a hilarious glob and you get The Complete Works of William Shakespeare Abridged.

“The show is written and performed in such a way that it doesn’t matter if you are a fan of the bard or never experienced him — you will laugh and love it!” says Justin Dionne, the director of the show. Cast member Brian Romans adds, “If you’ve never seen Shakespeare live before, DON’T BE SCARED…we haven’t either.”

The bad boys of abridgement Brian Romans, Jacob Asher, and Jason Roland have all worked together before on Lee Street theatre’s past abridged shows: The Complete History of America Abridged and All the Great Books Abridged, but this year they are tackling the works of the Bard himself. With only three actors and dozens of characters to cover, each of the boys has to play several characters, facilitated by wacky costumes and props, and for the female characters — wigs.

The boys will also take the show on the road and perform for the students at Carson and Salisbury High Schools on April 8. This tour is particularly important for the boys, as they all happened to see the show while in high school themselves and said that it definitely opened them up to liking Shakespeare. “I remember when I was in high school a group performed this very show for us, and I credit it with really turning me on to the possibility of Shakespeare as relevant and accessible,” said Jacob Asher, who plays nearly all of the female characters.

Whether you’ve been following the boys since their first performance or if this is your first time, you’ll be in for a real treat. Cast member Jason Roland sums it up perfectly: “this show is the strongest of the three we’ve done at Lee Street theatre. It’s very funny and isn’t dull for a minute. There is always something going on to look (and laugh) at.”

Tickets are $15 + tax and available online at leestreet.org/tickets or by calling 704-310-5507. All performances will be at the Lee Street Theater and Performing Arts Center at the Tom and Martha Smith Event Center, 329 North Lee St.