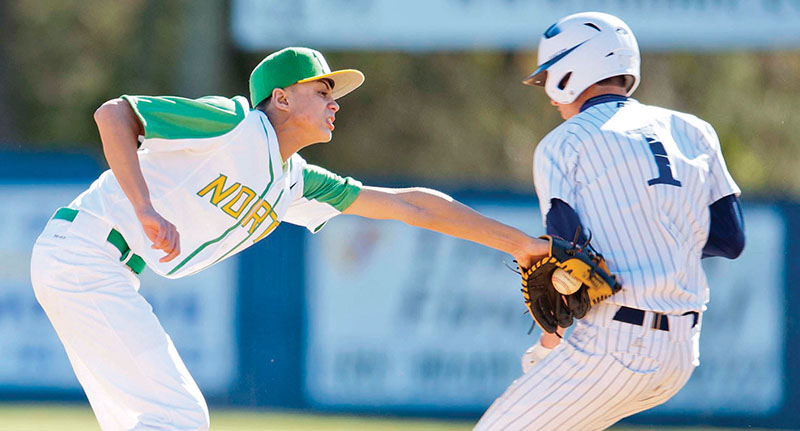 “Well, we scored one run in three games here and we went 1-2,” Kesler said. “That’s as good as you can do with one run.”

North Rowan’s 12 games have included eight shutouts, four by the Cavaliers (6-6) and four by the opposition. North Rowan was on the wrong end of a shutout Wednesday for the second straight day and took a 10-0, six-inning beating from Hickory Ridge.

Hickory Ridge is in seventh place in the nine-team South Piedmont Conference with a 3-5 record, but the Ragin’ Bulls pounded the Cavaliers at Staton Field.

“That was embarrassing,” North Rowan coach Aaron Rimer said. “That was pretty much a waste of a beautiful day for baseball.”

Corbin Smith and Noah Gonzalez had two hits each for the Cavaliers, but Hickory Ridge hurler Andrew Friends wasn’t looking to make any new pals. He mowed down the Cavaliers with little difficulty.

“We’ve got three quality starting pitchers, and we’ve played well all week,” Hickory Ridge coach Branden Knapp said. “We’re swinging the bats a lot better than we were early in the season, so we’re looking forward to the second half of the SPC race.”

“We had a guy out at the plate and we had a guy picked off second, and we had our opportunities to get out of it,” Rimer said. “We just didn’t execute on anything defensively.”

North Rowan had runners at the corners in the second, but Friends struck out Cory Fries to the end the inning.

North Rowan’s last chance to make it a game was in the third. Smith smacked a solid leadoff single, but when Brandon White rapped a hard groundball up the middle, Friends stabbed it and turned it into a double play. That play preserved his shutout, as Gonzalez followed with a double. Friends struck out Javin Goodine to end the inning.

Joe Harrison relieved Gonzalez in the fourth.  Fries relieved Harrison in the sixth.

Daniel Grochmal banged a triple for the Ragin’ Bulls to key a three-run sixth that led to the 10-run rule. Hickory Ridge ran the bases aggressively in that inning.

“We were able to create some havoc on the bases,” Knapp said. “That’s one of the things we do at Hickory Ridge.”

It could’ve gotten worse than 10-0, but Fries got three straight groundballs with the bases loaded.

North Rowan has to regroup after one of its worst outings. The Cavs had trouble pitching, hitting and in the field.

“You’ll have days like this in baseball,” Rimer added. “The answers are out there. We’ll get back to work and find them.”