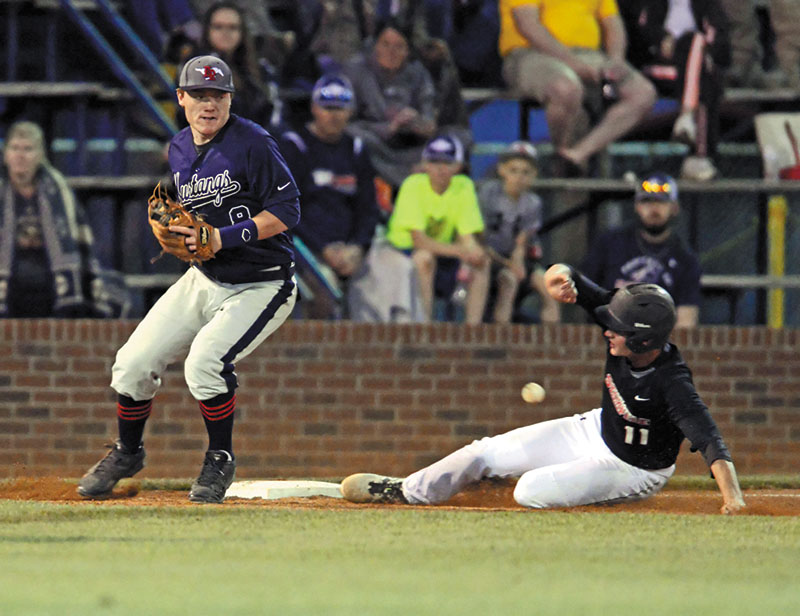 East Rowan’s energetic baseball coach chose to focus on the things the Mustangs did well, rather than things they didn’t in an unsightly 8-6 loss to the visiting Charlotte Stampede.

“To be honest, I can take a lot of positives away from this,” Hightower said after East Rowan (9-6) was charged with seven errors. “We gave them that game, no doubt about it, but we competed. We didn’t give in. We faced two pretty good arms and hit the baseball hard.”

“It was not a pretty game,” said Stampede coach David Darwin. “But we’ve got some talent. And when you hit the ball hard and run around the bases hard, good things tend to happen.”

East Rowan gave losing pitcher Tyler Scruggs a 4-2 lead in the last of the third inning when it packaged four hits and a sacrifice fly to score three times against Charlotte junior Bailey Meeks. Wyrick had one of his two doubles and teammates Ike Freeman and Jackson Justus delivered run-scoring singles.

“They were pretty good defensively,” said Wyrick, who also scored two runs. “They didn’t make a lot of mistakes like we did. (Meeks) had a good curve, but you just had to time him up in the on-deck circle.”

Scruggs, meanwhile, was pitching adequately at best. Through three innings he recorded four strikeouts, but ran into trouble in the second and worked out of a bases-loaded jam an inning later.

“He threw strikes,” Wyrick said. “He did his job. We just didn’t back him up.”

East Rowan withered in the top of the fourth, when Charlotte sent 10 batters to the plate and scored six runs — five of them unearned, thanks to a pair of Mustang miscues. Jacob Thompson grounded an RBI-single into right field to make it 4-3 and the Stampede drew even on an infield error. Then Meeks — who went 2-for-3 and reached base four times — blooped a two-out, two-run single into center field. Following a wild pitch, one of four uncorked by East Rowan pitchers, and another error, the guests had an 8-4 lead and Scruggs was out of the game.

“When you play defense like that, you’re not going to win,” Hightower said. “But I liked the way we battled back. We kept pushing.”

Scruggs was spelled by right-hander Harrison Bell, who allowed no runs, no hits and struck out five over the last 3 1/3 innings. And East Rowan rallied for a pair of fifth-inning runs on Freeman’s run-scoring triple to center and Joseph Peeler’s sac fly. But the Mustangs never rallied against Charlotte reliever David Graves, who retired seven of East’s last eight batters.

“We’ve got to pick it up defensively,” Wyrick said, scratching his chin afterward. “I guess we made stupid mistakes. Plays we normally make we didn’t make tonight.”