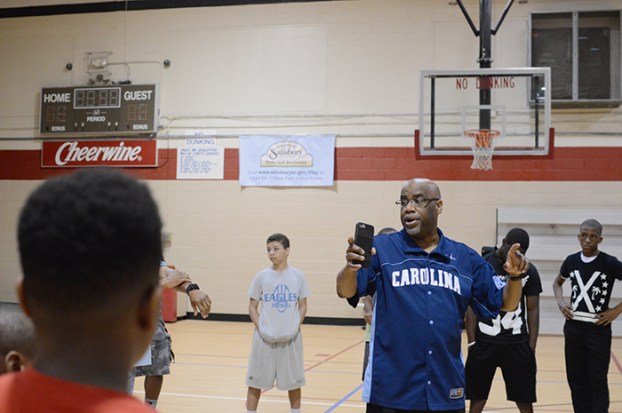 The Salisbury-Rowan NAACP is turning to the city’s youngest generation as community organizers continue a crackdown on crime in Salisbury’s West End neighborhood.

The NAACP and other community organizers this week hosted its second educational forum at the Miller Recreation Center for school-age males, in an effort to prevent criminal activity before it ever starts. The first was in February.

Salisbury-Rowan NAACP President Scott Teamer said he hopes to expand the forums into a mentorship program that would continue into the summer, after area schools wrap up.

“Sure, we do focus on civil rights, but we have a problem and our intention is a collective movement to get all of our community organizations working toward one goal,” Teamer said. “It’s important for us to be proactive, not reactive. We want our young people prepared for what lies ahead in life.”

A majority of hands went up in response to Hardin’s first two questions. He handed out a single dollar to the participant who correctly named three rappers and basketball players. When asking about three black astronauts, Hardin upped the ante and more than doubled the amount of money he was handing out to the person that correctly named three.

The group of students were able to name one and Hardin, half-joking, said he had never given out all of his money when posing those three questions.

“We’ve got to put just as much emphasis on education,” Hardin said.

The questions were followed up with a real-life scenario and informal speech from Alex Clark, a former federal inmate and community organizer. Clark cautioned the students in attendance about the frequent themes in hip-hop music.

As an example, Clark talked about his own life experiences. He served 17 years — 1996 to 2013 — in federal prison for a drug charge and another period of time in a halfway house.

“Imagine some of the things I missed out on,” he said.

“‘When I walked across the stage, all of these families were out there, but you weren’t there. When are you going to be out there?'” Clark recalled his son saying.

“What we don’t realize is that when we get sentenced, we sentence our children and families in one way or another,” continued Clark. “If you had a child in a two-parent home, now he is suddenly in a single-parent home. It’s more stressful for the mother because you had two incomes in that house and then it becomes a single-income house.”

Clark said he was selfish as a drug dealer.

“People say they do it for their families, but there’s other ways to take care of your family” he said. “You may not like going to someone else’s nine to five (job), but at the end of the day it’s not a bad thing.”

After a series of informal speeches — some more like a question and answer session — the participants played basketball as a team building activity and watched an educational documentary.

The mentorship event continued on Wednesday, with even more participants. Tuesday’s count was about a dozen. On Wednesday, more than 20 area students participated in the forum. Wednesday’s events also included a tug-of-war game as a team building exercise.

A firm date for the next mentorship event hasn’t been set, but Teamer stressed the importance of continuing into the summer, as a program after school ends would “keep the kids busy.”

“It’s easy to get in trouble,” he said. “We want to keep them busy, especially close to the night, so they’re not interested in getting involved with the wrong friends. We also want to have a little fun too.”

City crews will have the 100 block of South Fulton Street closed beginning Thursday morning at 8 a.m. to accommodate a tree removal by a... read more