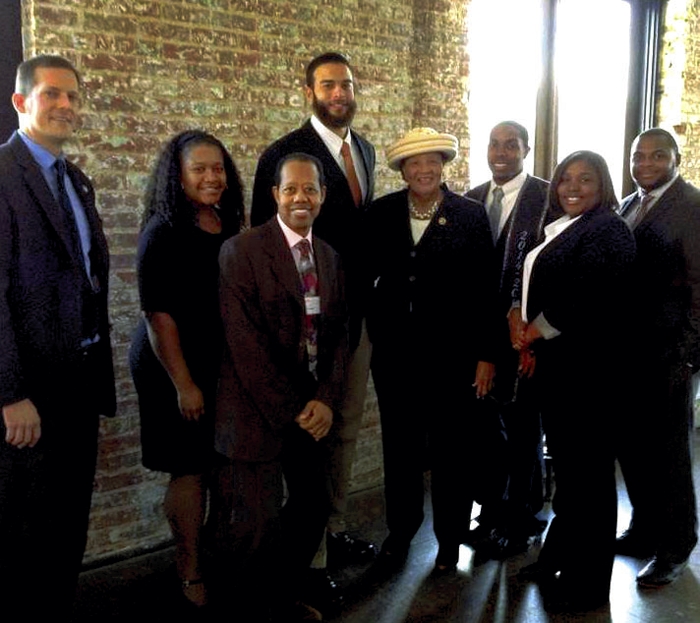 You could say March 28 was Livingstone College Day – sort of.

Despite frigid temperatures, the college held a parade at 9 a.m. to celebrate its men’s basketball team’s CIAA victory. The parade began at Soldiers Memorial AME Zion Church and ended on campus, where a brief ceremony was held to commemorate the historic win.

“We are in an elite class in the CIAA,” Livingstone President Dr. Jimmy R. Jenkins, Sr. said to the crowd gathered in front of the bear on the institution’s front lawn. “To be back-to-back champions is clearly something that happens once in a lifetime.”

Jenkins later joked to the crowd, which included his wife Dr. Faleese Moore Jenkins, that he expects the team to “three-peat.”

The victory celebration was only one of many activities featuring Livingstone College students on March 28.

As the parade was winding down, members of the Livingstone College Concert Choir, led by Director Dr. DaVaughn L. Miller, were on their way to Charlotte to perform at Northeast SDA Church. The choir also performed at the Duke Energy Center for the Performing Arts in Raleigh on Sunday.

“As usual, the choir gave an uplifting performance that many in the audience enjoyed tremendously,” Miller said. “It’s not always easy to get college students excited about an early morning performance on a Saturday, but they did well and I’m proud of them.”

“I’m very proud of the overall effort displayed by the team, particularly given the cold weather on Saturday,” Head Coach Justin Davis said. “The meet at Winthrop University was our second of the season, and I’m confident both the men’s and women’s teams will continue progressing as we endeavor to make an outstanding showing at this year’s conference championship meet beginning April 17 at Johnson C. Smith University.”

“I’m very proud of the way we performed,” Springs said. “This is my first year coaching players with previous golf experience, and their skills are being demonstrated on golf courses this season.”

Golf of a different sort was enjoyed by Livingstone students Tijana Smith and LaBarbara Amaker, who participated in the 27th Annual VIP Putt-Putt Golf Tournament sponsored by Rowan County Parks and Recreation. Tanya Turner, coordinator in The President’s Office, attended with them.

“While playing putt-putt is certainly fun, I wanted to expose the students to the event because it was for blind or visually impaired individuals,” Turner said. “It’s important for our students to realize how blessed they are. Being of service to others is a human obligation we want to instill in them now so they will carry it with them for life.”

“I had an awesome time,” Wells said. “It was a nice family event, and the fact that we were raising money to support the United Negro College Fund wasn’t lost on me.”

Of course, everything Livingstone students participated in on March 28 didn’t involve sports or recreation.

“Even though it was a chilly Saturday morning and we had to arrive around 10:30, I was humbled by the opportunity to get to meet and talk with Congresswoman Adams,” Walker said. “It’s not the typical outing for a college student on a weekend, but I know the experience was invaluable and is something that will look good on my resumé. I’m grateful to attend a college that emphasizes education beyond the classroom.”